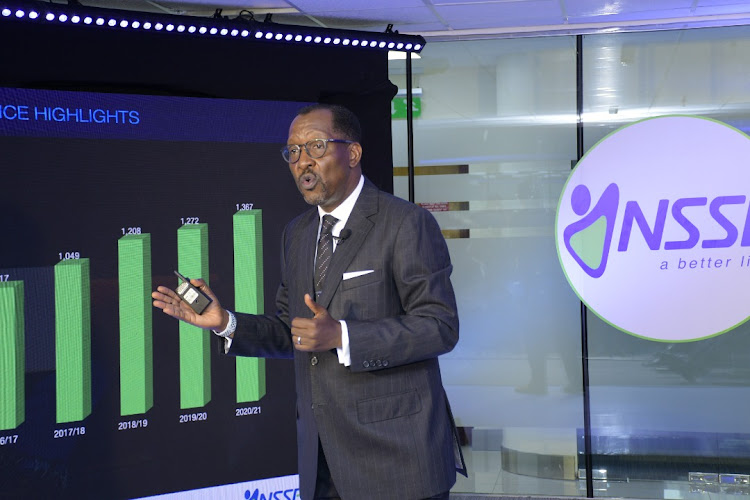 The National Social Security Fund (NSSF) comprehensive income for the 2020/21 Financial Year has  increased by 25% from UGX 1.472 Trillion to  UGX 1.84 Trillion despite the effects of the COVID-19 pandemic.

Richard Byarugaba, the Fund’s Managing director has attributed the increase to growth in interest income largely attributed to the increased return on Treasury Bonds in the Fixed Income portfolio, dividend income, and property sales.

He says the performance demonstrates the Fund’s ability to withstand shocks occasioned by a stressed economy and an uncertain business environment in the era of COVID-19 pandemic.

The Fund’s performance also show that it’s Assets under Management (AUM) increased by 17% from UGX 13.3 trillion to UGX 15.5 trillion as of June 30, 2021, mainly driven by increased contributions and interest income despite an increase in Benefits paid out.

Member contributions has also increased by 8%    from UGX 1.27 trillion to UGX 1.37 trillion, despite recorded job losses in some sectors of the economy.

The amount of money paid out to qualifying members also increased by 29% from UGX 496.4 billion in 2019/20 to UGX 642.3 billion in 2020/21. The growth is attributed to an increase in number of claimants and the introduction of IB payments for COVID-19 patients, Byarugaba noted.

Byarugaba assured NSSF savers that the Fund is committed to creating value over the long term, while remaining dynamic enough to respond to members’ needs in the medium term, especially with an enabling legal regime upon enactment of the NSSF Amendment Bill.

“Our performance demonstrates that we are creating value for our members even in a very difficult economic environment, and this value will be reflected in the return the Minister of Finance, Planning & Economic Development will announce next week.”

Finance Minister Kasaija will announce the new interest rate on members savings at the Annual Members Meeting which will take place on 29th September 2021.

The Fund is well positioned to implement the new provisions once they become law.

“We have been preparing over the last one year when it became clearer that the bill would be passed. We have solutions for the changes on the horizon, for instance mid-term benefits including mid-term access, expansion of coverage to include the informal sector, and expansion of the voluntary space. We have built a very dynamic institution that can adapt, embrace these changes and thrive,” he said.