MTN Uganda Lists 22.4 Billion Shares on USE After Successful IPO 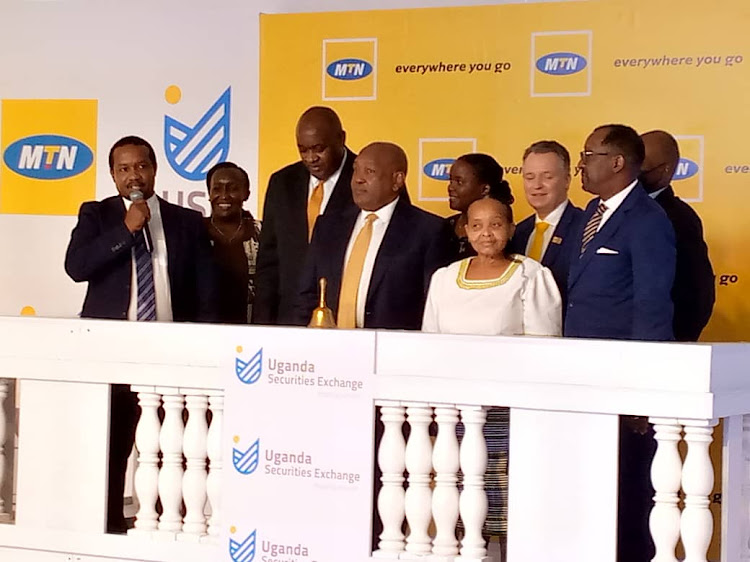 Speaking after the listing of MTN Uganda’s 22.4 billion shares on the Uganda Security Exchange, Dr. Baryomunsi said the high cost of the internet remains the biggest   challenge mainly to the Ugandan young population who wish to start businesses that require use of the internet. He asked telecommunication companies and UCC to look into affordability of  broadband services and quality of voice calls for Ugandans, and reduce the cost of the internet.

“With this landmark IPO, the objectives of the national broadband policy have been achieved.  Ugandan individuals and professional investors now own more than 15% of MTN Uganda. You elevate from just being users of MTN Uganda services to being part owners of MTN Uganda, this means now MTN is ours” said minister Baryomunsi

The  listing of the company’s shares on the Uganda Security exchange according to Minister Baryomunsi is a big deal for the government and the people of Uganda.

“With this transaction, Ugandans now have a stake in one of the notable growth sectors in the country” he said.

Chief Executive officer MTN Uganda Wim VanhelLeputte says IPO journey has been a success, adding that the number of Ugandans, who own shares in MTN has risen from 4% to 15% now.

“I am very happy and   am extremely proud on behalf of my team to officially announce to you that MTN Uganda has fulfilled the objectives of the national broadband policy. We have increased our Ugandan ownership from previously less than 4% of the company. Today more than 15% of MTN Uganda is owned by Ugandans. And that, ladies and gentlemen is what I call a success because we have delivered on the aspirations of the broadband policy, we can now confidently say Uganda is truly our home” said Vanhelleputte

Monday's  listing   on the USE is the climax of a journey that started three years ago. According to Mr. Vanhelleputte this journey started in September 2018 with the issuing of the new national broadband policy by the government of Uganda through the ministry of ICT

One of the key objectives of the policy was to increase the Ugandan ownership in telecommunication companies through localization to listing on the biggest Ugandan stock market which is the USE. This became one of the key obligations in MTNs renewed national telecom operator licence.

“During the IPO, every Ugandan was given a chance and an opportunity to participate and become a co-owner, a shareholder in our great amazing company” he noted

MTN Uganda Chairman Charles Mbiire described the listing as a major milestone in the history of  the  telecommunication company.

“We are delighted by the success we have achieved by broadening and opening up our shareholding to Uganda. Starting today almost 21, 000 ordinary Ugandan citizens will graduate from being not just customers of MTN Uganda but also owners.

A good number of these he said are first time investors in the stock market who took advantage of the innovative deployment of MTN Uganda’s digital product to participate in the biggest IPO ever in Uganda.

Mbiire assured all stakeholders that “we shall continue to be guided by the very pillars that we have underpinned and sustain our success in this country that is; customer centrality, regulatory compliance, and good corporate citizenship”.