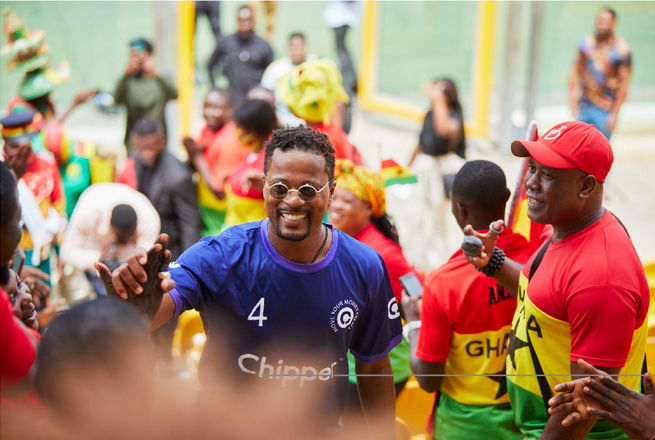 Patrice Evra used a four-day visit to Ghana to bolster support for Africa to the World, the Chipper Cash campaign with a 50,000 USD fundraising target to get fans from three supporters’ clubs—-Cameroon, Ghana, and Senegal into the stadiums to cheer on their teams.

During his visit, Patrice met with the President of Ghana, Nana Akufo-Addo. He also spent time with the supporters’ groups.

In his reaction to the trip, Patrice said, “I was so excited to be in Ghana on the mission to help bring African supporters and their great energy to the World Cup. What a good cause.”

Senegal-born Patrice captained the French national football team in the 2010 World Cup and joined the squad for the 2014 tournament.

“Having Patrice on the ground to rally support for the Chipper Cash campaign made a real difference,” said Hasan Luongo, Vice President of Global Marketing at Chipper Cash.

“We are aiming big with Africa to the World in order to get as many fans as possible from the continent to the heart of the action in Qatar. We are confident that, if everyone who can chips in, we will fill the stadiums with the legendary African supporters’ spirit.”

Africa to the World will provide fans travel, accommodation, and entry tickets to the matches of qualifying African teams playing in the tournament. A 30,000 USD donation from Chipper Cash launched the campaign.

To bring the power of the World Cup to as many as possible, Chipper Cash is also offering customers who pay using their Chipper Card a chance to win an all-expenses-paid trip to the FIFA World Cup 2022 in Qatar, as well as other prizes.