We beseech the Lord of fashion to rescue Kim 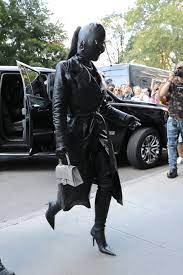 On Saturday the 40-year-old reality star arrived in New York City wearing head-to-toe — literally — black leather by Balenciaga, posing at the Ritz-Carlton hotel in a black belted trench, stiletto boots, gloves and a full face mask covering everything but the long dark ponytail dangling from a hole in the back.

Sharing photos of her daring look on Instagram, the mother of four was met with mixed reviews. While pals like LaLa Anthony — seen partying with the star on Instagram Stories — voiced their approval, and some called the ensemble "badass," others found it a little too frightening.

"Kim honey noooooooooooooooo this is not American Horror Story," read one of several comments drawing comparisons to the show's Rubber Man.

"Ma’am are you okay?" a follower wrote, while another declared it "not [your] best look."

"This is fashion?" a fan asked, as many simple responded with some variation of "WTF."

Several commenters suggested that Kardashian's estranged husband, Kanye West, was responsible for the leather look, which may be the case. The rapper has been sporting his own series of elaborate masks over the past several months, obscuring his own face in a black mask while promoting his new album, Donda, last month.

Kardashian herself helped support the album by wearing another all-black Balenciaga ensemble that included a head covering with narrow slits for her eyes, mouth and ponytail. She also wore a wedding dress during a Chicago listening event for Donda, sparking speculation that the former couple have reconciled.