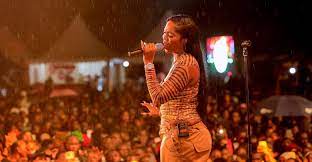 Lugogo Cricket Oval was filled despite the evening downpour at Tiwa Savage's concert.

The show that was under the theme ‘’Who Runs the World?’’ featured performances from several Ugandan female artists such as Karole Kasita, Vinka, Winnie Nwagi, Cindy Sanyu, and Jowi Landa among others.

As she had promised earlier, Tiwa watched every performance of the evening in her backstage set and the deep appreciation for Ugandan talent was evident on her face after she promised to work on collaborations with some local acts in the future.

At 10:00 pm, the lights were cut out, Tiwa Savage‘s official hypeman J Brizzy stepped on stage and that was clear that the awaited Nigerian Singer was yet to grace the stage.

She took to the stage at 10:24 PM, she was dressed in brown baggy khaki pants and an animal print top, however, she was irritated by a sound hiccup the moment she kicked off her performance.

The technical problem was fixed and she expressed her powerful vocals as she performed most of her hit songs, from the least known to the latest releases like ''Korob'', ''No Wahala'','' Somebody’s Son'' among others.

Revelers got more excited when Tiwa was performing her'' Kele Kele Love'' song, they sang along with her word by word a sign that they enjoyed her performance of one and half hours.

What is unforgettable about the show is that she performed under the stage canopy to easily unite and enjoy with her fans.

As she wrapped up her performance, she took revelers to church when she performed her song “Somebody’s Son” off her latest “Water and Garri EP”. She revealed that the song was written with spiritual inspiration, from the fact that everyone needs the son of God in their lives.

Tiwa left the audience in astonishment when she introduced her 7-year-old son Jamil, whom she had been pregnant with the last time she performed in Uganda on Women’s day in 2015.