Egypt regains its looted “Green Coffin” from the USA 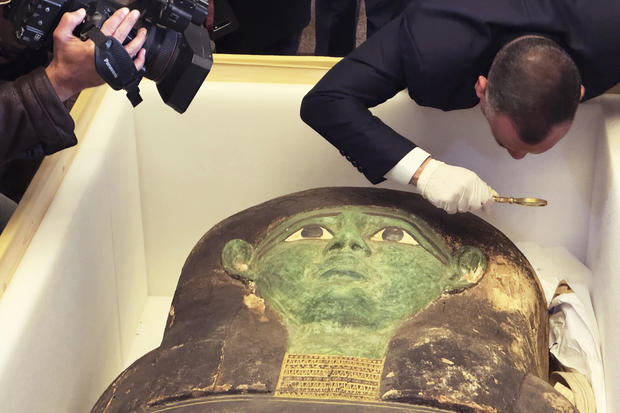 Mostafa Waziri, top official at the Supreme Council of Antiquities, takes a look with a magnifier at an ancient wooden sarcophagus during a handover ceremony at the foreign ministry in Cairo, Egypt Courtesy Photo

Egypt has regained its looted ancient sarcophagus that has been on display at a US museum.

The wooden 2.9m (9.5ft) long "Green Coffin" was used by a priest called Ankhenmaat during the late Dynastic period which lasted from 664 BC to 332 BC.

A global network of art traffickers stole the priceless sarcophagus from the Abu Sir necropolis in northern Egypt and smuggled it into the US through Germany in 2008.

It was then loaned by a collector to the Houston Museum of Natural Science in 2013where it has been on exhibit.

The sarcophagus was repatriated after an investigation that lasted several years and was formally handed over by US diplomats at a ceremony in Cairo on 2nd January 2023.

While handing over the coffin, the US chargé d'affaires in Egypt, Daniel Rubinstein noted that the gesture was a symbol of the long history of cooperation between the United States and Egypt on antiquities protection and cultural heritage preservation

As the Minister of Tourism and Antiquities in Egypt Ahmed Issa stated, the sarcophagus return showed Egypt's strenuous efforts to recover smuggled artifacts.

The sarcophagus was turned back to Egypt after Manhattan District Attorney Alvin Bragg revealed that the Green Coffin, which was valued at over $1m (£830,000), was illegally trafficked out of Egypt by a multinational network of antiquities smugglers.

He added that the network was also responsible for trafficking the "Gold Coffin”, which was returned to Egypt in 2019, the Stele of Pa-di-Sena, which is also from the Late Dynastic Period that was handed over in 2020, and five pieces seized from New York's Metropolitan Museum of Art in 2022.

Meanwhile, in 2021, Israel handed over 95 relics smuggled into the country or found for sale in Jerusalem, the US is not the only country that has returned antiquities to Egypt.