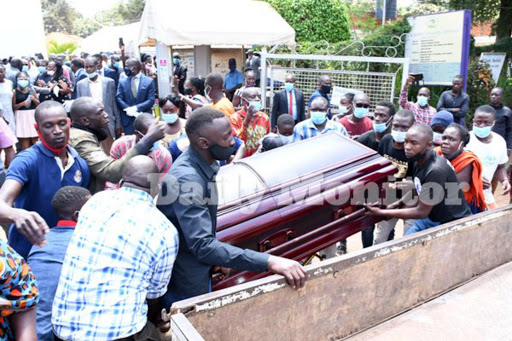 Drama has ensued at All Saints Cathedral in Kampala after relatives of the late lawyer Bob Kasango and that from his wife's side fought on where to bury him.

After his funeral service, relatives from his wife's side wanted to take him to Fortportal for burial claiming that they had already made all the burial arrangements.

However, his relatives led by his mother, protested the move claiming that the late Kasango was a Japadhola from Tororo and that he should be buried at his ancestral home but not at his in-laws place as if he was homeless.

His mothers side later over powered his wife's side and took the body by force and bang it to a van .

Kasango succumbed to heart failure at Luzira Maximum where he was serving a 16 year jail sentence handed to him by the anti corruption Court in 2018 for embezzling 15 billion shillings of pensioner's money with three others.