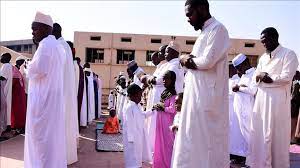 Kibuli Mosque has received an assortment of commodities worth over UGX 40 million intended to help the needy as they go through this holy fasting period of Ramadhan.

While handing over the assortment from Stanbic bank in partnership with Salaam Charity,Ali Lwanga the Regional Manager for the bank said, "the consignment contains sugar, maize flour, cooking oil and so many other things and they are to be distributed to the needy and unprivileged Muslims in the central region."

He added that due to the financial effects that came with the outbreak of COVID-19, many Muslims are finding difficulties as they carry on this fasting period that is why they had to offer them this donation.

On the same event the Administrator, office of the Supreme Mufti Kibuli Mosque Sheikh Luwalira Lubowa has asked Muslims to respect the holy Ramadhan month by fasting according to God’s will if they are to get His reward.

Sheikh Luwalira noted that, Muslims should fast even when they have less food to break the fast with because it’s a pillar to obey therefore one shouldn’t first be rich to practice the exercise .

However Sheikh Luwalira advised Muslims to continue praying as they observe the SOPs so that they stay alive even after Ramadhan.