He was convicted on charges of soliciting a bribe 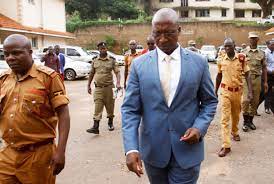 Former minister for Labour Herbert Kabafunzaki has survived spending three years in Prison after he paid a 10 million court fine.

On the 8th of October, Anti Corruption Court Judge Margaret Tibulya ordered Kabafunzaki to pay 10 million, or failure to do so would have him serve five years in Luzira prison.

However,  the former Minister who was sentenced in his absence has paid the Court fine through his lawyers and is a free man as we speak.

Kabafunzaki was convicted of soliciting a 15 million bribe with his aid Brian Mugabo from the proprietor of Aya group of companies in April 2017 as an inducement to clear him of sexual harassment allegations levied against him by his former female employee.

The Court also barred him from holding a public place for a period of 10 years.

I have heard and considered all that has been said by the prosecution.The fact that the convict jumped bail can only mean that he has no respect for the criminal justice system, and speaks to his lawless character.He was clearly a mistake in the exalted office of Minister and in public life.The fact that he could solicit andvreceivd a gratificationin the ma ner he did only shows that he was erroneouslyplaced in the offices of Member of Parliamentand Minister .The Embarrassment he caused to the appointing authority can never be atoned for in anyway

He was convicted after Justice Tibulya ruled that prosecution had adduced sufficient evidence to prove the alleged charges including evidence from Mohammed Mohammed Hamid in which he testified that the accused and his agents informed him that the money was a cost for clearing his name of sexual harassment allegations.

However, during the hearing of the case, he disappeared and at one time, his then-lawyer  Evans Ochenge told the court that he did not know the whereabouts of his client.

This forced the judge to cancel his bail and ordered police to arrest him on sight and has been in hiding since then.

Kabafunzaki was arrested on the 8th of April at Serena hotel in Kampala after he was set up by state operatives to receive the said bribe.

By the time of his arrest, police found 5 million shillings he had received in an envelope. E