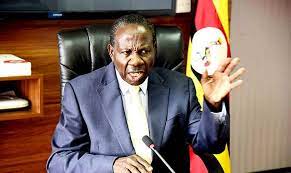 The Judiciary has commissioned the 9.2 billion shillings Electronic Court Case Management Information system  (ECCMIS) as a way of promoting law and quick access to justice.

According to the Judiciary's Permanent Secretary Pius Bigirimana, person-to-person contact is one of the means leading to corruption in the Judiciary.

The system that has taken five years for the experts to develop will also reduce the number of case files that get lost.

The Minister for Finance and Economic Planning   Matia Kasaija who officially launched the system said this new venture will save a lot of money for the Judiciary and the country in general.

Kasaija added that with the new system in place, case determination will be easily done due to the availability of case information online.

Speaking at the same function, Chief Justice Alfonse Owinyi Dollo revealed that about 4 trillion is locked up in the commercial court due to lack of financial facilitation for the said cases.

Application of ICT is part of the key Solution to  bottlenecks hindering justice delivery; that is delay in delivering Justice with the resultant case backlog

In 1997, the judiciary embarked on the digitization process including video conferencing,  digital court recording and transcription process that speeds up the hearing process, Electronic display board for cases, and now online filling of cases among other digital transformations.

According to the chief justice, all these are meant to ease the Judicial work and access to speedy delivery of Justice.

Justice Dollo noted that cases like Kampala bombing cases were exposed in off timely because they had Electronic transcription of proceedings which made it easier to be disposed of within two years, but if they had to write everything by hand, then it would have taken a maximum of five years  to  get  the case  heard.