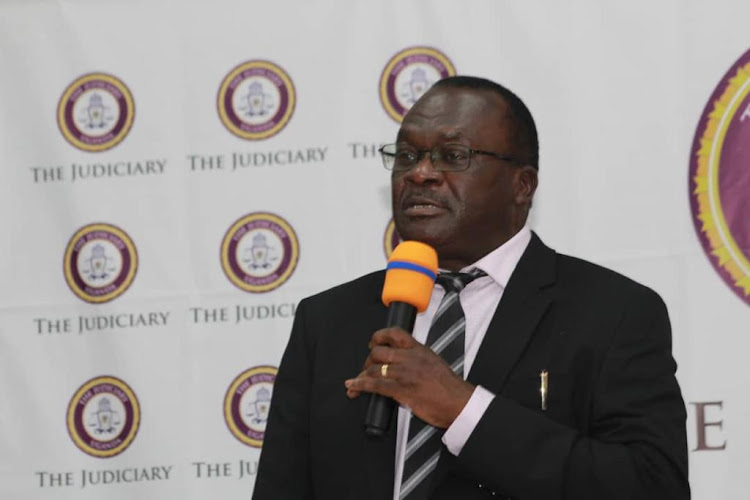 The Chief Justice Alfonse Owinyi Dollo has called upon the newly appointed grade one magistrate to desist from Corruption, which he says is eating away the Judiciary.

While Officiating at the swearing in ceremony for the 48 magistrates, Chief Justice noted that although some people are scared to admit that corruption does exist in the Judiciary, he was not afraid to say so.

He called upon the new Magistrates to fight any temptation of corruption in line of their duty as a way of preserving the image of the Judiciary.

"Do not succumb to any of those vices and be mindful of how you come to court including your attires. Carry yourselves with integrity and humility instead of being just nice in the administration of justice" he said.

He further called upon the magistrates to be firm in exercise of their judicial work by not letting Advocates to use them, or senior lawyers to bully them, maintaining that as Magistrates, they were the courts.

Your duty is to interpret and pronounce the law when you have listened to evidence of the disputants,  and the litigants before you.

According to the CJ , fighting such scenarios will make them reach at the right decisions by extracting the right evidences and called upon them to hear accurately, to answer wisely, to consider soberly and to decide Impartially  each time they handle a case.

"You can't be an adjudicator  and you are neutral. So please go out there, state your Oath,  many times Judicial officers are concerned about  writing a judgement that pleases people,  that is not function" justice Dollo averred.

He reminded them that they are not there to make people happy because they have won the cases but to please God, and  their consciousness.

He  advised them to always dispose off cases in a timely manner  to avoid case backlog.