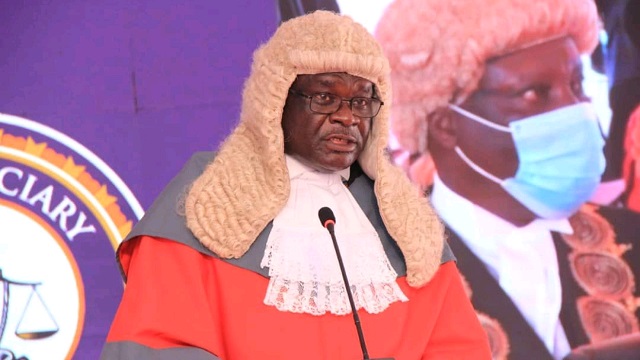 The Judiciary has deployed the 48 newly appointed and sworn in Grade One Magistrate in different stations across the country in a bid to take Judicial services closer to people and transferred 17 Magistrates.

These were yesterday sworn in by Chief Justice Alifonse Owinyi Dollo who called upon them to never violate their oaths of allegiances taken. In the new deployments, Goma, Kangulumira, Gomba, Mbirizi, Kibuku, Nakisunga, and Lamwo Courts have been fully operationalized with the posting of Magistrates Grade One.

She noted that the said deployments take immediate effect while the transfers are effective January 01, 2022.

The Chief Registrar is mandated to effectively oversee judicial operations of all Courts.

The Chief Justice further called upon the Judicial officers to support the Judiciary’s goal of “transforming of the Judiciary landscape, image, and place in the country.

Go out there knowing that you carry a banner and mantle that says Justice for all.

He further unpacked the Judicial Oath for the new Magistrates reminding them that the Judicial Oath and Judicial Code of Conduct should be their guardrail and source of inspiration they were to perform effectively in accordance with the demands of their judicial offices.

He emphasized the need to uphold; Independence, Impartiality, Integrity, Propriety, Equality, Competence, and Diligence, which are the six major principles enshrined in the Judicial Code of Conduct.

The Deputy Chief Justice, Richard Buteera, advised the magistrates to ensure that they do the right thing in the discharge of their duties.

"Don't be surprised that there are complaints against you, your worry should be, are the complaints valid."

He also cautioned them against acts of corruption with the Principal Judge, Dr. Flavian Zeija, calling for integrity and warning them against stealing from the Judiciary.

"If you know you have come to steal in the Judiciary, withdraw your oath. You will not survive here, because there is no compromise.”

He equally cautioned them on absenteeism saying it was not tolerated.