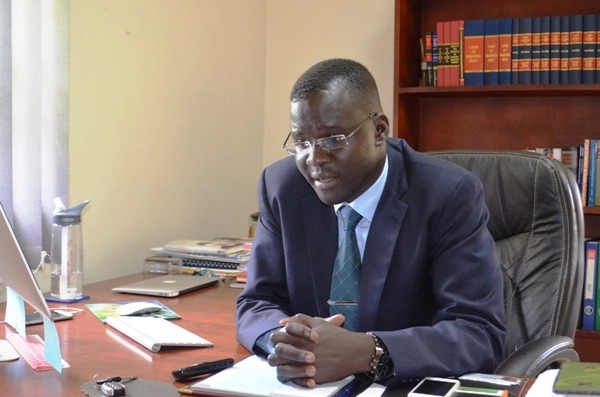 Kampala High Court Judge Musa Ssekaana ruled that their indefinite Suspension was irregular because of its indefinite nature and yet it was intended to allow comprehensive investigations into their operations. 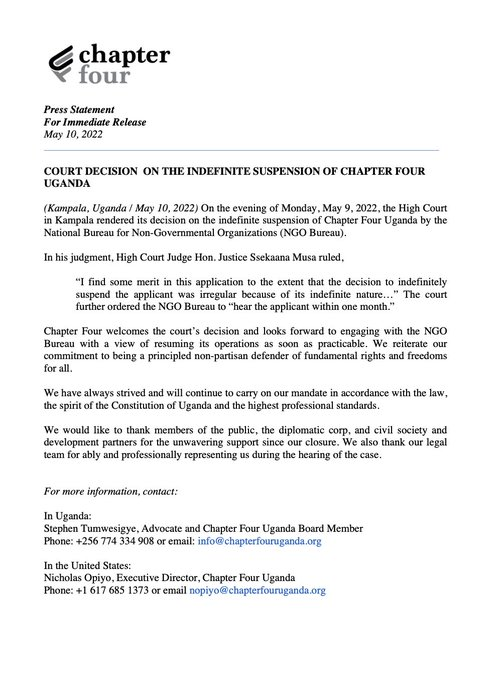 Justice Ssekaana has further suspended the Bureau's decision to suspended  the said Organisation's permit to operate in Uganda and ceases their operations with immediate effect purportedly to enable them carry out investigations into their operations in Uganda.

Court further issued an order prohibiting the Bureau, any government department, any government Agency, any government authority, any government official, their respective officers, servants, agents, representatives, or any person, from directly or indirectly or in any other way, implementing, applying, using, or relying on the impugned orders and/or decisions communicated in the respondent’s letter dated August 18, 202 from halting the applicant’s operations and/or transactions.

Government wad also bared from victimizing, intimidating and/or harassing Chapter Four Uganda in any way; which victimization, intimidation, and/or harassment may arise from and/or by the said Court order.

"In the case before this court, it has been shown that the respondent suspended the applicant indefinitely which was irregular due to lack of  any time frame and yet the said suspension was intended to allow ‘comprehensive investigations into their operations to enable the bureau determine whether or not to revoke the NGO permit and cancel registration.

"The Bureau has further been directed to accord Chapter Four Uganda a hearing and conclusively deal with issues at hand justly and fairly.

Chapter Four Uganda and other Non-Governmental NGOs were accused of falling to comply with its requirements to submit filings.

According to Stephen Okello the Executive Director of NGO Bureau, Chapter Four Uganda was closed together with 53 other Non-Governmental Organizations for alleged failure to comply with the legislation covering their operations.

Being dissatisfied,  Chapter Four Uganda through its lawyers of AF Mpanga and.Company Advocates filed an application before the High Court Civil Division seeking to quash the aforementioned decision.

They argued that the Uganda Police Force has since implemented the NGO Bureau's decision as a revocation of its permit and subsequently their bank accounts have equally been frozen. Chapter Four Uganda sought court to quash the decision by the NGO Bureau, issue a permanent injunction prohibiting the government and its agents from relying on or implementing the aforementioned decision.