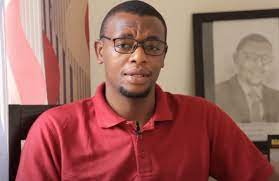 Lawyers representing self-exiled Novelist Kakwenza RukiraBashaija have told the court that his four sureties had cleared the 40 million that the court had ordered them to pay to incase their client jumped bail.

In April, Buganda Road Court Chief Magistrate Dr.Douglas Singinza issued a warrant of arrest for the said sureties including NUPs Secretary-General Lewis Rubongoya after Kakwenza flee the country in February this year to Germany to allegedly seek further medical treatment for the injuries he allegedly sustained while in detention at the hands of security operatives led by first son Gen. Muhoozi Kainerugaba.

Sitting in Grade one magistrate Sanula Namboozo, however, adjourned the matter to the 1st of June 2022 since the trial Chief Magistrate was indisposed and extended Kakweza's arrest warrant.

The Sureties had been ordered to execute a 10 million each non-cash Court bond that had to be paid in cash they failed to make sure that Kakwenza returned to court for the trial of his case in which he is charged with abusing the said first son and disturbing the peace of President Museveni.

He is charged with two counts of offenses of offensive communication against the person of President Museveni and his son Lt Gen Muhoozi Kainerugaba.

According to Prosecution,  Kakwenza, allegedly uploaded a tweet on his official Twitter handle " Kakweza Rukira@kakwezarukira" which the prosecution says was meant to disturb the peace of the president and that of his son Muhoozi.

He pleaded not guilty to the said offenses allegedly committed on the 24th  and 28th of December 2021  before he was released on bail in January of 2022.

Before being produced in court, Kakwenza was first held in unknown detention for close to two weeks, before being remanded secretly by the same Court when he reappeared in court, he was seen with severe injuries on his back and hands with plucked out nails which he claims that were inflicted on him at the orders of the first son. He flee the Country after Dr.Singinza declined to release his passport to travel abroad for further medical treatment and has since stated that he will never return back.