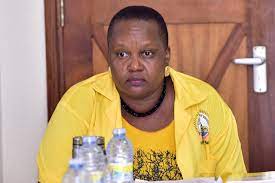 The Court of Appeal has declared Connie Nakayenze Galiwango as the validly elected Mbale City woman member of Parliament.

This after three justices led by Elizabeth Musoke dismissed an election appeal filed by her political rival and NRMs Lydia Wanyoto on grounds that her Appeal was filed out of time.

Wanyoto was seeking nullification of Nakayenze’s election saying the principles and the provisions of the law relating to the conduct of credible elections were never followed as numerous election malpractices and irregularities were committed by Nakayenze and EC, which affected the poll results.

In April 2022, Wanyoto run to the Court of Appeal challenging justice Bashaija's decision accusing the trial judge of erring in law and fact when he dismissed her Election Petition.

She accused justice Bashaija of based on evidence outside the court to reach his decision and asked the Court of Appeal to order a retrial of the said petition before the High Court under a different judge.

However, she had filed the said Appeal past the stipulated time, claiming that the lower Court delayed giving them a copy of the judgments. Galiwango was declared the winner with 40,729 votes against Wanyoto's 25,276 votes.