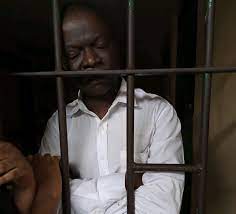 The state has objected to the bail Appeal filed by the Kawempe North MP Muhammad Ssegirinya and Makindye West MP Allan Sewanyana challenging the decision by the Masaka High Court to deny them bail on two different occasions.

However, the prosecution led by Kyomuhendo Joseph objected to the said Bail Appeal on grounds that the Appeal was filed in the wrong Court.

Kyomuhendo submitted that by law, the MPs were meant to file fresh bail Applications instead of challenging the Masaka High Court decisions.

He observed that although the Masaka High Court had first granted them bail, the MPs were re-arrested and denied bail on a similar murder case.

However,  Lukwago informed Court that their clients have nowhere to seek any redress since the High Court has denied them bail.

The MPs also informed the Justices that they need immediate specialized private medical attention with MP Ssegirinya claiming that his private parts are sick and in need of urgent medical attention.

Ssegirinya explained that their conditions including heart-related diseases and hypertension can not be managed by the prison, since they only treat patients suffering from Malaria, calling on the Court of Appeal to order the prison authorities to compel them to have access to their private medical doctors.

The Court has now directed Kigo Government Authorities to allow the MPs to have access to their private specialized Doctors for the medical attention they are seeking after every seven days.

The MPs are charged with murder, terrorism, and attempted murder among other charges, which the prosecution says are all related to last year's Bijambiya murders in greater Masaka.

They have been on remand since September last year. The case has been adjourned to the 29th of this month when Court will rule on the said preliminary objection.