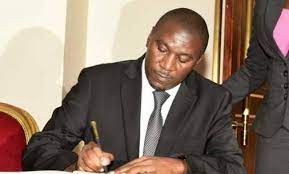 However, justice Ssekaana has dismissed the said Case on grounds that the NRM Party did nothing wrong and advised the aggrieved party members to leave the party if they feel unfairly treated.

"It would not be appropriate under judicial review to determine whether the decision of the party-CEC is illegal. The NRM party Central Executive Committee in the exercise of their constitutional mandate or discretion took a decision in the best interests of the party. The available alternative Procedure to challenge their decision is the most appropriate since it is an election complaint with the party structures. If the applicants are aggrieved by the decision of CEC and they feel that they cannot politically ‘breathe’, then they are at liberty to leave the party in order to breathe freely." Justice Ssekaana ruled.

Justice Ssekaana further ruled that the vetting of candidates was necessary and it is not in the interest of the party to forward the 130 names to Parliament for the election instead,  CEC sat and considered 63 contestants, after 67 contestants withdrew their expression of interest.

He stated that  CEC performed its duty by vetting and only recommending 6 Contestants and that the applicants accepted to take part in the electoral process through the party guidelines which required vetting by Central Executive Committee, and that they cannot approbate and reprobate by challenging the same system they allowed to be part of at this later stage.

Through their Lawyers Usama Ssebuufu and Robert Lutalo, the aggrieved party members claimed that they were discriminated against and inconvenienced and sought Court to declare the said move illegal and subsequently quash it.

They argued that they had spent a lot of time and resources in mobilizing support among the electorate whose expenses were not catered for in the CEC resolution that opted to call off these elections last month.

These then sked justice Ssekaana to order NRM Party to compensate them all the money they had spent looking for votes ahead of the polls slated for this month.

However Anthony Mbaziira the Lawyer who represented NRM and its Electoral Commission; asked Justice Ssekaana to dismiss the case with costs; citing the failure by the 23 aggrieved aspirants to use the Internal Tribunal of NRM to solve disputes as provided by the Party Constitution.

According to Mbaziira, the Party members wrongly filed the said case before the High Court and should have first used all the Party structures to solve their grievances before seeking court intervention.

Last month,  the applicants withdrew their application for an interim order and chose to argue their main case.