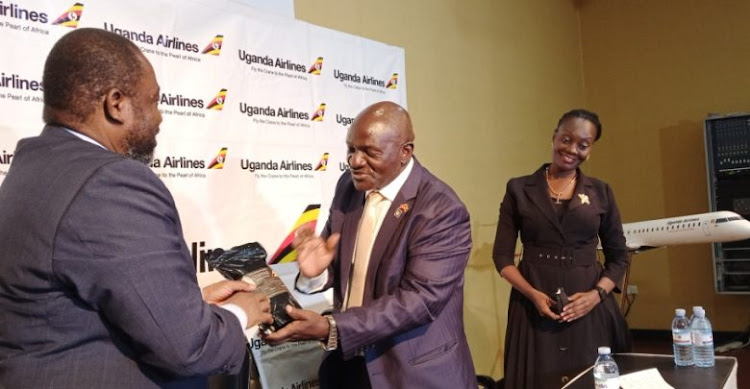 Mr. Abderahmane who is in Uganda to assess the readiness of the Uganda government and Uganda Airlinesz towards hosting the coming African Airline summit due to take place in November next year says any starting Airline company at least needs five years while focus on marketing, convincing customers as well competing for routes.

According to him, throughout this period, the airline can't make profit but it plays critical role in supporting and facilitating the growth of other sectors especially Tourism and Trade.

Abderahmane says Africa airline sector is facing a lot of challenges and it was one of the sectors hit badly by COVID -19.

In his interaction with journalists at Speke Resort Munyonyo accompanied by State minister for Transport Gen. Katumba Wamala and Jenifer Bamuturaki, the CEO Uganda airlines. Mr. Abderahmane revealed that the facilities they have toured so far, there is no doubt Uganda has the required capacity to host the General Assembly come 2023.

According to him, out of 44 member states, AFRAA considered Uganda following its successful application in previous meeting held in Nairobi.

‘’In the meeting, we shall be discussing a number of issues rotating around strengthening the Airline business in Africa as well as strengthening it to stand strong amidst all challenges,” he says.

For his part, Minister Edward Katumba Wamala extended the government’s appreciation to the delegation from AFRAA for entrusting Uganda, one of their youngest members, with hosting such a high level meeting.

Apart from creating employment opportunities for people in Transport, Hotel and Hospitality sector, Katumba pledges to engage the Ministry of Tourism to ensure that it fully utilizes the opportunity of encouraging the visitors to take tours to several destinations across the country.

He added, “They also strive for implementation of cost effective Human Resource Development and lobby for market access to increase revenues and enhance connectivity for the African Aviation sector.”