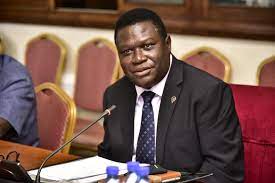 The Newly appointed minister of justice and Constitutional affairs and Democratic Party President Nobert Mao has asked the government to find the remains of the late Justice Benedicto Kiwanuka.

The late Kiwanuka was the founder of the Democratic Party and the first Chief Justice of Uganda, however, in 1972, he was dragged from his Chambers at the High Court in Kampala by Soldiers working on President Idi Amin Dada's orders and taken to Makindye military barracks where he was murdered.

However, 50 years later, the remains of Kiwanuka who would have been 100 years old today have never been recovered and some information shows that after he was murdered, his body was immersed in Acid and dissolved.

Speaking at his Fifth Memorial day Celebrations at the High court in Kampala,  Norbert Mao asked President Museveni who was the chief guest to help find Justice Kiwanuka's remains even if that remain was in form of a single tooth so that they can give their Party founding leader a decent burial that he deserved.

According to Mao, technology exists and by using forensics,  they can trace any remains of Justice Kiwanuka since they know where he was allegedly murdered from.

Mao further echoed that the Government is committed to helping the Judiciary attain its full independence.

He stated that as minister of Justice and Constitutional Affairs and a leader of a party he founded, Kiwanuka lived an exemplary life and promoted Democratic governance maintaining that an Independent Judiciary is critical in promoting Democracy, peace, and economic development.

He further applauded the Judiciary made in attaining their independence and that agitators and campaigners in the Catholic Church are already making a move to persuade the pope to consider him to be canonized alongside Julius Nyerere.

He said that today, they celebrated his sacrifice and struggle and that Ugandans must ask themselves what is the rule of Law and that there is a need to take a whole government approach to understand the rule of law.

He revealed that they will be giving support in form of empowering the Police in investigations, the DDP in personnel and financial support, and training Judiciary staff to do their work more efficiently.