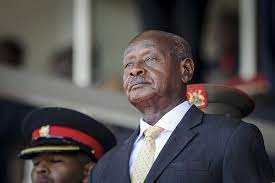 President Museveni who officiated at the 50th Benedicto Kiwanuka Memorial day Celebrations at the High Court was reacting to Uganda Law Society President Bernard Oudo who asked him for support against security Agencies like Police among others who have failed to respect Court orders of status quo.

In his response, Museveni stated that although the Judiciary must be Independent, they should not use the said Independence to abuse their powers.

He stated that the said problem is sometimes a result of a Lack of convergence between the courts, and the public.

He added that if   Security agencies do not agree with the said order, it will be hard for them to put it into action, citing instances like in Land wrangles in which a court issues an order of evicting a whole village at the expense of one person.

According to president Museveni,  there is a need to reconcile the bibanja and milo land owners and maintained that Judiciary should be Independent but there should be convergence in some instances like murder, and land wrangles which are very contentious to reach a consensus.

He further explained the need to regulate bail stating that under the law, you may give it but it is not a must.

The  President said that he needed ample time to think about the issue of Judicial Independence in relation to the consumers of Justice in this Country.

He described the late Ben Kiwanuka as a principled person who stood against the tribal chauvinism of the Mengo Government to that on Uganda's National issues.

He however stated that the late Chief Justice Benedicto Kiwanuka partly contributed to his death by accepting to work with Idi Amin.

The President said that he and the late Benedicto Kiwanuka were strongholds in the DP not until Benedicto accepted to become Chief Justice in Idi  Amin's Regime which had no respect for Judicial Independence.

He reminded Ugandans that they brought peace, Democracy and dismantled sectarianism of religion and tribe, and repaired Uganda's Economy.

Museveni said that before they went to war to liberate Uganda, which was at 14 million then, the Economy was in shambles but now, Uganda has a bigger Economy that is flourishing in the peaceful environment they created.