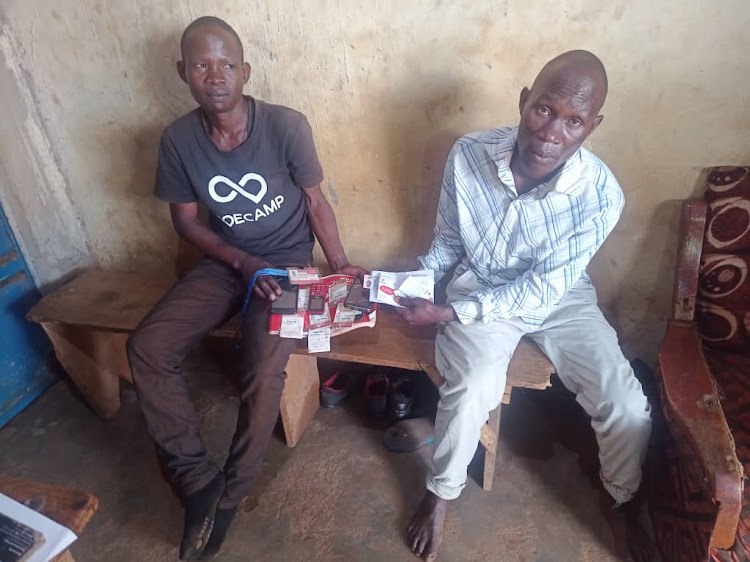 The suspected fraudsters paraded before the media in Iganga district
Image: courtesy

Two men have been arrested for allegedly impersonating Airtel employees and defrauding customers in Kasolo village in Iganga District.

The suspects, identified as Mujasi Denis, and Maganda Alex were intercepted after one of the Airtel customers in Iganga tipped off the Police to arrest them. The two had fake Airtel staff identity cards, which they used to disguise and defraud customers.

“Before these suspects were intercepted, they had allegedly managed to get Ugx 50,000 from several customers of Airtel in Kasolo Village who they tricked into sharing their Airtel money pins and promised to upgrade their Airtel Simcards,” said OC Iganga Mr. Martin Karekyezi.

Upon arrest, Police reached out to Airtel representatives in the region to support identifying the suspects and file a case against them, and later they were transferred to Iganga Central Police Station for further investigation.

The Airtel Territory Sales Manager Jude Ssekadde praised the vigilantism of one of the victims who alerted the police and urged the public to be more alert and report such incidences to the nearest police or Airtel offices in their areas which will help reduce fraud in society.

“Airtel is committed to fighting fraud in Uganda, and we shall closely follow this case until the two suspects are brought to book. We believe that will serve as a warning to the rest,” remarked Ssekadde .

According to Joseph Kizito, the consumer affairs specialist at the Uganda Communications Commission, fraud issues have largely dominated complaints at the Commission in the last two years.

The advent of Covid-19 meant that many people went online for education, commerce, entertainment, work, and a lot more. But as the traffic increased, thugs also took advantage.  Rising fraud complaints.

The public is being urged to be very suspicious whenever they hear the word ‘PIN’ in any phone conversation or text message even if it is someone you know.