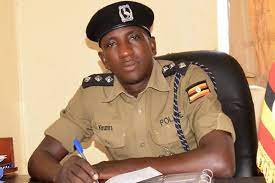 Drama has ensued in the late ASP Muhammad Kirumira murder trial after Justice  Margaret Mutonyi of the High Court in Kampala accepted to tender in as exhibit a confession statement allegedly made by Abubakari Kalungi, despite the said suspect denying ever making it.

Today, DPP'S representatives Joseph Kyomuhendo and Timothy Jatiko presented the alleged confession statement, with prosecution witness Steven Walimbwa who allegedly recorded it at the CID headquarters in Kireka defending it.

However,  the defense team led by Zimbe Zefania, informed the court that his client never made the said Confession statement anywhere but was instead forced to append his signature by security operatives at Mbuya on a statement he does not remember after they threatened to kill him if he did not.

As a result,  the defense had asked Court to hold a trial within a trial over the alleged Confession statement. Still, Justice Mutonyi declined their submissions and instead told them that they would have a chance to cross-examine the prosecution witness over its authenticity.

ASP Kirumira was gunned down on September 8th, 2018 near his home at Bulenga in Wakiso district.

The suspects include;  Abubakar Kalungi a resident of Mirimi Zone Kibutika-Ndejje in Makindye-Sabagabo also a Carpenter and one Hamza Mwebe. It is alleged that on September 8th, 2018 at around  8PM at  Bulenga, Kalungi, Mwebe with others still at large murdered ASP Mohammad Kirumira and one Resty Nalinya Mbabazi using a gun.

The deceased persons were driving in a Saloon car belonging to Kirumira when they were gunned down.