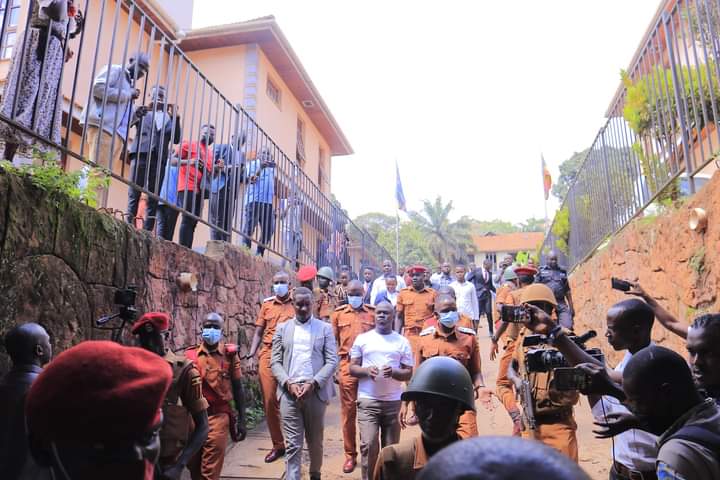 International Crimes Division Justice Alice Komuhangi has dismissed an oral Application filed by MP Muhammad Ssegirinya and Allan Ssewanyana's Lawyers in which they sought to he availed with an ex parte Application filed by the state in which they want Court to allow them hide the identities of 17 prosecution witnesses and their evidences among other requests before the commencement of the main case.

Lawyers for the 7 suspects led by Medard Ssegona had urged that they needed the said information to facilitate their efforts to apply to be heard in the said ex parte Application.

Ssegona further submitted orally that the ex parte hearing infringes on the non derogatory right to a fair hearing as enshrined in Article 28 of the Constitution of Uganda However, prosecution led by Richard Birivumbuka and Joseph Kyomuhendo objected to the defence's oral submission stating that both the High Court and ICD Court provides for such an ex parte in order to protect the identities of the Prosecution witnesses and  ensuring their safety and security and that of the evidence.

According to the state prosecutors,  availing the the defence with the said application and its annexures at such a stage of pre trial hearing will prejudice the safety and  security of the witnesses and subsequently their case.

In their Affidavits in support of the ex parte Application,  the assistant Director of Public Prosecutions Thomas Katiko a prosecutor in the said case and Superintendent of Police Mubangizi Innocent told court that some Witnesse's have expressed fear after being threatened due to their perceived association in the investigation and prosecution of the said case, that  the 17 witnesses are key to the Prosecution of the said case and their lives are at risk since other suspects are still at large and that some suspects in the said case are big people in society and are likely to interfere with prosecution witiness among others.

According to the state,  they want the court to allows them avail such evidence to the defence, 15 days prior to their testimonies.

Justice Komuhangi agreed with the state and allowed, the state to present their Ex Parte Application stating that coyrt had a duty to protect the safety and security of witnesses abd their close associations when needed and has set the 29th of this month to hear the said ex parte Application.

She further stated that the defense team will be notified of it's decision in the said matter.Ssegirinya and Sewanyana with five others are charged with murder, terrorism, attempted murder and aiding a terror group.

The charges are in relation to the greater Masaka Bijambiya murders that left over 10 people hacked to death by unkown assailants in 2021.

The oppostion MPs are accused of facilitating the said killings in an alleged retaliation for the alleged theft of their presidential victory. End.