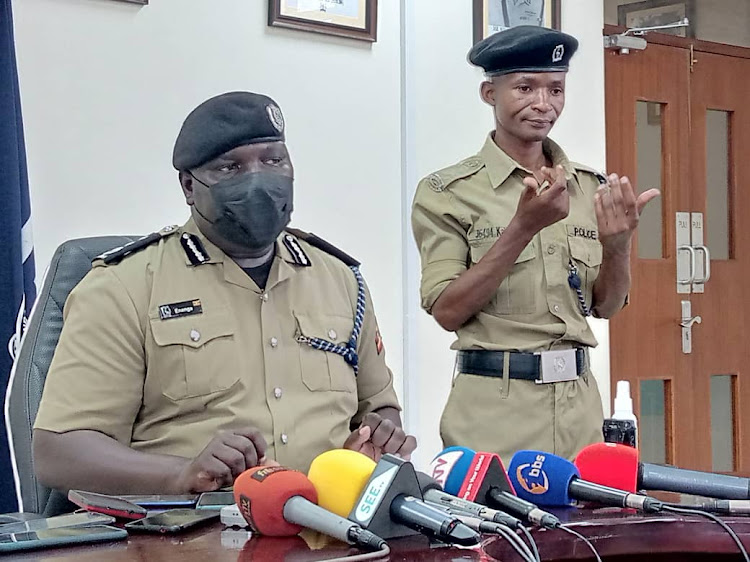 The Joint Security task force which is investigating the organized machete wielding criminal gang responsible  for the gruesome murders of people in greater Masaka have arrested 15 suspects highly connected to these attacks which have left over 25 people hacked to death in the last five weeks.

Addressing a news conference at Police headquarters Naguru, Fred Enanga noted that the criminal gang had established three cells  where they would base to  attack  people in Kimanya- Kabonera , Bukoto south, and one in Lwengo district which they could base to terrorize the people but one cell of Bukoto west  was dismantled.

Fred Enanga noted that the six suspects who include; Kawalya Yazid, Muwonge Jude, Nakakawa Sylvia, Jjemba Francis, Kibedi Yona Baptista and Sserwadda Micheal were part of the gang which has been terrorizing the people of Masaka while the nine suspects were arrested in Lwengo and are behind the murder of 17.

We have since established that the assailants have been operating on cells where they have been attacking elderly persons staying alone.

Fred Enanga also noted that they have established  some clues from the suspects . They have told security that they are recruited and paid by some residents within Masaka  and Lwengo.

He says that as per now they can not reveal the motives of the attackers due to ongoing investigations but the security teams are interested in knowing and establishing the sponsors of this gang groups.

Fred Enanga noted that the security teams are now focusing on enhancing security of elderly persons who are the main target in these attacks but he also appealed to the people to be collaborative in giving information to the investigating teams because some fear.

The suspects arrested so far are facing 19 counts of murder, attempted murder and terrorism following the deadly crime spree, they have admitted to participating in the multiple slaying of the victims.