President Yoweri Kaguta Museveni has commended higher institutions of learning that continued in innovative ways to carry their mandate of giving education to students amidst uncertain times the country is going through due to covid 19.

In his massage delivered by Minister for higher education JC Muyingo during installation of Former Nigerian President Goodluck Jonathan as the new third Chancellor for Cavendish University Uganda, President Museveni note that the government recognizes the work by Private universities to complement the government’s efforts in education sector.

According to him, higher education is recognized across the world as an engine for growth and development and it is against this background that the government committed itself to ensure all citizens of Uganda attain education up to this level. 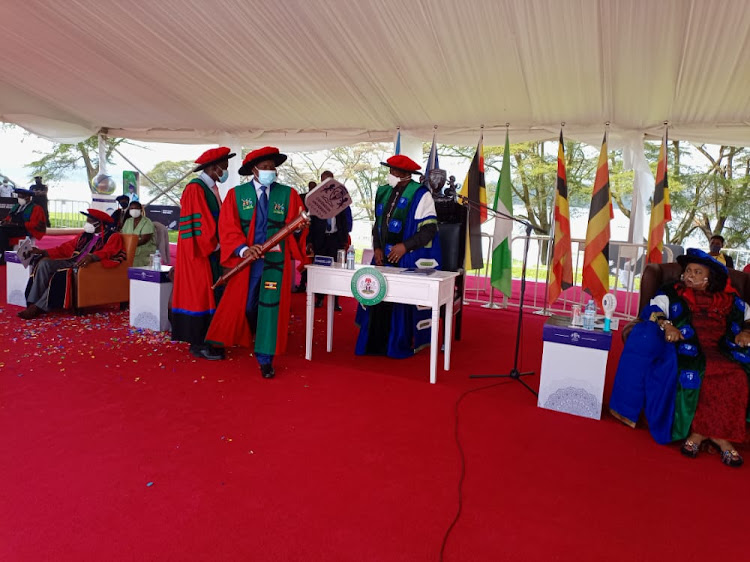 Goodluck Ebele Azikiwe Jonathan, has taken an oath a ceremony administered to him by Hon. Justice Micheal Kibita from Supreme Court and was assisted by the Ankole diocese Bishop Rev. Fred Sheldon Mwesigwa who also doubles as vice chancellor for Bishop Stewart University Mbarara.

After taking an oath, Goodluck was officially installed and given instruments of authority of the office of chancellor by Minister in charge of higher education John C. Muyingo.

Upon addressing the congregation, the New Chancellor has observed the need to create academic industry partnership among African countries to address issues affecting education sector on the continent. However he said, this can work better if academia fully supports industry.

He further noted that scholarship plays a significant role in helping students peruse education, therefore funding for scholarship should be considered by all African countries.

During the event, Cavendish University also held its 10th graduation ceremony where over 600 students have been awarded with degrees and diploma from different courses.

At the beginning of event, there was observation of silence among the participants in recognition for both former Zambia president, the late Kenneth Kaunda and former Tanzania President, the late Benjamin Mkapa who were first and second chancellors for the same university respectively.