The MPs are charged with murder and terrorism among other charges 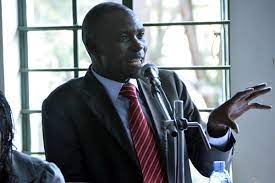 The state has asked the Constitutional Court to dismiss a Constitutional Petition filed by City Lawyer Hassan Male Mabirizi challenging the fresh charging of Kawempe North MP Muhammad Ssegirinya and Makindye West MP Allan Ssewanyana with another count of murder.

In his petition,  Mabirizi states that the said fresh charge that led to the cancellation of the MPs granted bail was unconstitutional because it did not have to be a separate charge from the other charges that they had been granted bail upon.

However, in response, the attorney General says that Mabirizi's petition doesn't require any Constitutional interpretation since it is not inconsistent with the law.

According to Kyomuhendo Joseph, the state prosecutor,  the new murder case involves different transactions and cannot be on the same file as the first case since the first charges were alleged committed w in Masaka on 23/8/21 while the second case was committed in Lwengo on 2/8/21.

The Attorney General further states that the actions of the 29th September 2021 i.e Masaka Court chief magistrate reading of the new case to the suspects of the murder of Joseph Bwanika on 2nd August 2021 against the two MPs after they were first charged on the 7th of September with the murder of Mugerwa Kiiza Francis, Kakooza Sulaiman, Kiyimba Tadeo, allegedly committed on the 23rd of August 2021 and attempted murder of Ssebyooto Ronald on the 23rd also, to which they had been granted bail is not inconsistent with the Constitution.

The Attorney General insists that the said actions do not contravene or infringe the Constitution and that the actions of the Director of Public Prosecutions and the chief magistrate are Constitutional and do not deprive the said legislators' personal Liberty or their rights to seek legal representation, apply for bail and doesn't amount to political persecution.

They are jointly charged with four others including Sserwada Mike, Muwonge Jude, Wamala Bulo and Mugerwa John in which prosecution states that the group committed the said offences at Ssenya Village, in the Masaka City and Ssettaala Village with malice aforethought.

They were remanded on the 8th of September 2021 they were arrested at Masaka police station where they had gone for the second day to make police statements on the famous 'bijambiya' killings in Masaka district.