Stand firm against People tainting the image of Buganda Kingdom 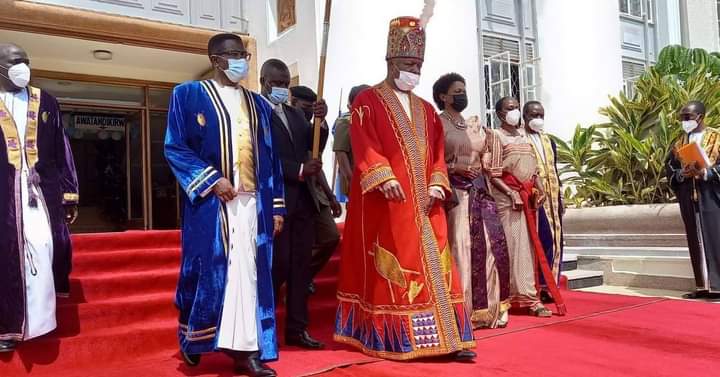 The King of Buganda Ronald Muwenda Mutebi II has implored his subjects to stand firm against people spreading propaganda against the kingdom.

Speaking during the opening of the 29th Great Lukiiko at Bulange-Mengo on Monday,  His Majesty Mutebi II said that it’s everyone's responsibility in the kingdom to dispel rumors and hatred spread about the Kingdom by opportunists.

Buganda Prime minister Charles Peter Mayiga speaking to one of the guest who turned up for the Lukiiko.

According to the President Buganda Land Board  was illegally instituted.

"There is a group of people in Uganda who are committed to taint the Kingdom’s Glory and image ,stand firm and fight such propaganda aimed at weakening the Great Kingdom," said  Kabaka Mutebi.

Kabaka Mutebi used the ceremony to remind people with power to have political will in the fight against corruption which has affected service delivery to people in the country.

"Most of the people think that corruption is all about swindling money, but it entails a number of issues including Nepotism, impunity, environmental degradation among others which require concerted effort to fight such evils for the betterment of our country" he stated.