Gov'f fails to block Case of Failure to Translate Constitution 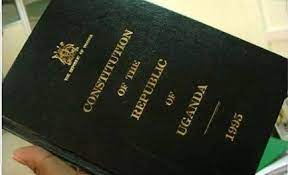 The High Court in Kampala  has given a go ahead to two lawyers to continue with their case instituted against government for alleged failure to translate the 1995  Constitution  into indigenous languages.

Civil Division Justice Boniface Wamala gave the go ahead after dismissing submissions by Government to have the case dismissed .

The Attorney General through state attorney Moses Mugisha  had claimed that the case was wrongfully filed before the court which had no jurisdiction to hear it but had to he heard by the Constitutional Court.

However, Justice Wamala ruled that the  case should proceed since the petitioners  sued  in their individual capacities not on behalf of the people of Uganda.

In 2019, two lawyers Martins Kirya and Michael Aboneka  sued government and accused it  of failing  to translate the Ugandan Constitution into all the local languages  24 years since its enactment.

The lawyers claim that  government also failed in its duty to ensure that all education, training and military institutions review their curriculum to incorporate and teach the constitution to their respective students and participants or pupils as mandated by law.

These are seeking court to declare that the period  of 24 years without government fully implementing the above mandatory obligations is unreasonable, unjust and defeats the ends of justice.

They  also asked  court to order government to provide monthly updates to the court and the general public on the status of the translation process for the Constitution.

They say that the said action by government is unconstitutional because it  failed to fulfill its commitments made under the Constitution.

They want court to  order a  review of the Education Curriculum of all Educations, Training institutions to promote the full awareness and teaching of the constitution and another order to disseminate programs regularly in the national media.

The advocates further asked court to order  government to consider the visually impaired persons and the deaf through customizing the translated versions into usable formats while translating the constitution.