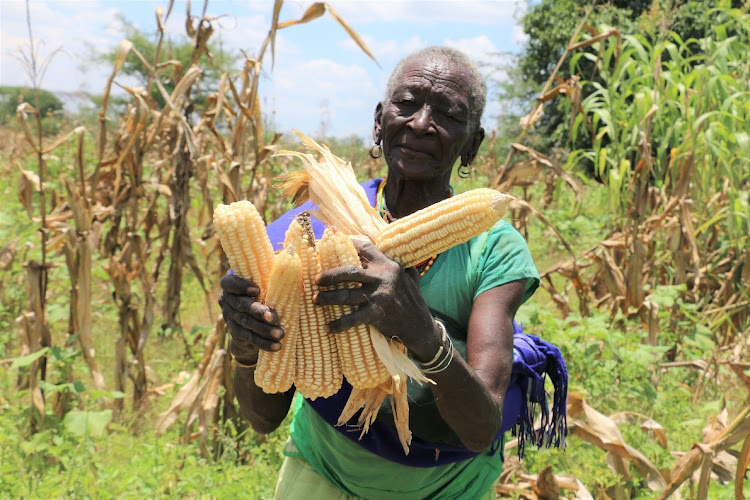 An elderly woman stands in her garden in Amudat district, after harvesting maize.
Image: Courtsey Photo

The Food and Agriculture Organization of the United Nations and the Office of the Prime Minister are convening a four-day workshop to hasten timely and quality early warning bulletin production and dissemination in Karamoja, for early action.

According to FAO’s Representative in Uganda, Dr. Antonio Querido, the FAO-led project component focuses on developing an effective government-owned and operated system that integrates capacities to forecast, monitor impact of shocks and disseminate early warning messages.

He says during the workshop, stakeholders discussed and reviewed the project’s progress to date, with focus on ameliorating the established drought early warning system that produces monthly bulletins for each of the nine districts in Karamoja. The districts in Karamoja sub-region are Abim, Amudat, Kaabong, Karenga, Kotido, Moroto, Nabilatuk, Nakapiripirit and Napak.

The project aims to strengthen the capacity of the Government of Uganda to reduce, anticipate and rapidly respond to the effects of shocks while sustaining climate resilience in the Karamoja sub-region.

Speaking at the same event Mr. Jino Meri, the Kaabong LC V Chairman said that the bulletins really helped them to analyse the situation effectively, predict the deteriorating food security situation in the District and make a good case to the central government for assistance.

The current drought early warning system has already proved its worth to the communities, amongst others of Kaabong district and In response, the OPM provided relief in the form of beans and maize flour, to vulnerable communities in Kaabong to avert a food security disaster Said Mr. Jino Meri, the Kaabong LC V Chairman.

FAO is leading the project’s component on early warning systems focuses is on enabling national and local stakeholders to benefit from the improved capacity to generate and disseminate early warning information in a timely and accurate manner.

Furthermore, the capacity strengthening needs are validated and prioritized, building on previous work. Lastly, participants are receiving training on specific elements of bulletin production, on the use of data sources, software and data analysis.

An endorsed roadmap for further development and improvement of the early warning system as well as a draft capacity strengthening strategy are key deliverables of the workshop.

The “Strengthening Shock Responsive Systems in Karamoja” (PRO-ACT) project is a collaboration between the Department of Relief, Disaster Preparedness and Management of the Office of the Prime Minister, WFP and FAO, funded by the European Union Directorate-General for International Partnerships and DANIDA, targeting all nine districts of Karamoja sub-region.