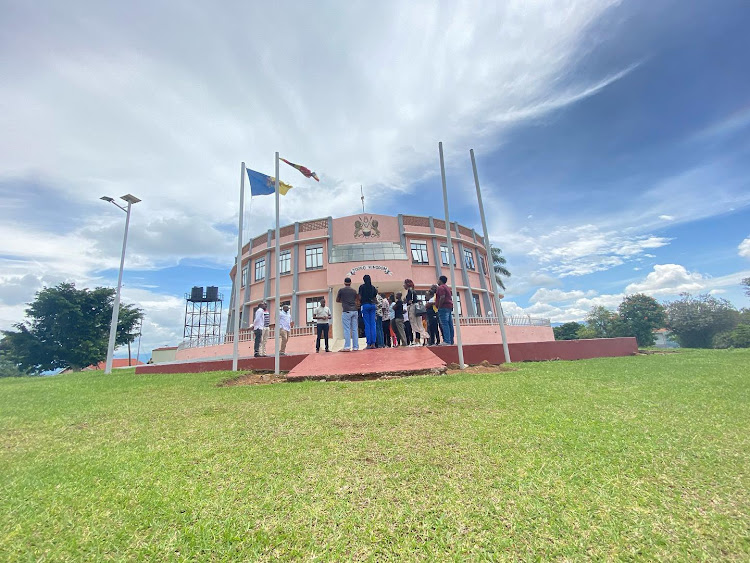 Capital Fm Staff waiting for photo opportunities with the Omukama of Tooro.

The  World's youngest reigning monarch, Omukama of Tooro Oyo Nyimba Kabamba Iguru Rukidi IV has commended Capital Radio for doing a good job over the years in entertaining and educating the masses.

Capital Radio presenters visited the King at his palace that beautifully seats atop Harukoto hill a few meters drive away from the City Centre along Kasese road.

The station is currently conducting a promotion dubbed CapitalradioNationaltour where all presenters travel to respective regions across the country to touch base with their loyal listeners and Gulu, Mbarara, and Fort portal have already tasted the beauty of associating with the number one radio station in the land.

A Concert is also organized where top Ugandan musicians come and entertain the fans but also the local musicians from around the visited districts are given the opportunity to share the stage with the big shots in the industry.

A visit to the Tooro Kingdom in Karuzika is one of the highlights of the Fortpoartal visit.

"I want to officially thank you that are here today and Capital radio at large for the job you are doing-especially in promoting our programs," Omukama said.

I would like for us (Tooro Kingdom and Capital radio 2015 ltd) to sign a memorandum of understanding so that you can officially report on all our programs and projects, we need a partnership, the King added.

The King also gave some of the presenters’ totem names commonly known as Empako by the Batooro.

Addressing a person by her or his Empaako name is a positive affirmation of social ties. It can also be used as a greeting or a declaration of affection, respect, honor, or love.

In the tradition, children are given a pet name in addition to their given and family names.

In 2013, the tradition was inscribed by the United Nations Educational, Scientific and Cultural Organization, UNESCO as an intangible heritage in need of safeguarding.