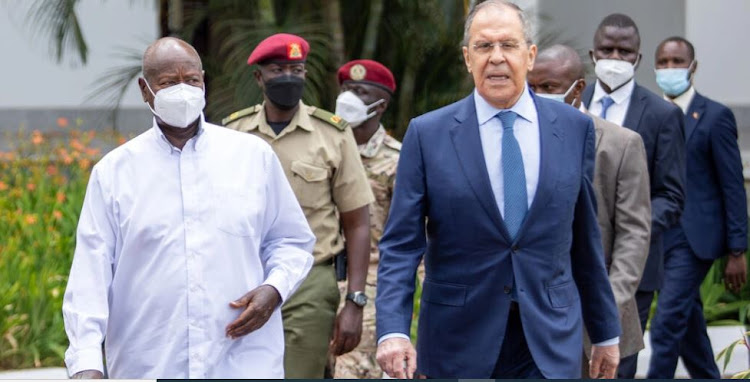 President Yoweri Museveni on Tuesday defended his country's relationship with Russia, as Moscow's top diplomat toured Africa to drum up support over the war in Ukraine.

This was announced during a presser by President Museveni and visiting  Russian Foreign Minister Sergey Lavrov at State House, Entebbe.

President Museveni noted that Uganda wants to trade with Russia, adding “ we want to trade with all countries of the world. We don’t believe in being enemies of somebody’s enemies”.

His excellency commended Russia for their long-standing relationship with Uganda saying Russia has been supporting the anti-colonial African movement for the last 100 years.

In one of his tweets, he noted “ we want to make our own enemies  not fight other people’s enemies.”

The president asked Russia for its assistance  to develop a nuclear power plant in the region.

“Uganda would like a small satellite to see what is happening around the globe, then nuclear energy” he stated.

Russia Foreign Minister Sergey Lavrov and his delegation visited Uganda this week as part of his tour of African countries . Other countries visited are Ethiopia, Egypt, and Congo-Brazzaville.

Russian exports to Africa account for US $14 billion a year and imports of African products of about US $ 5 billion making the bilateral trade to about US $ 20b .

Russian Trade and Investment has been increasing in Africa and like China it has also viewed the African Continental Free Trade (AFCFTA) which came into effect on Jan 1 st this year as an opportunity.

Uganda was one of 17 African nations to abstain during a vote in March on a UN resolution that overwhelmingly condemned the Russian invasion of Ukraine.