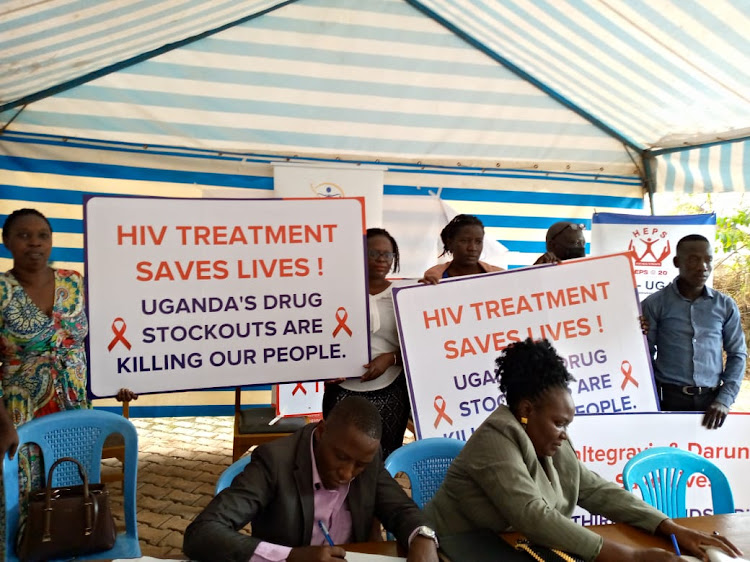 Civil Society Organisations decry the  stockout of HIV drugs which has greatly affected treatment for people living with HIV/AIDS since November last year.

Addressing the press today at HEPS Uganda offices at Mengo Atim Salome the human rights activists says a total of 2500 patients who are on third- line can not readily access the drugs  which increases the risk of Anti retroviral resistance leading to death.

Atim Salome says that they have not yet received any clarification about the stockouts from ministry of health, Uganda AIDS commission and other stakeholders.

Atim further adds that for the last six months there has been shortage of treatment for third - line of these medicines and also it has created fear that may lead to serious drug resistant cases.She revealed that because of lack of treatment in the country, women with HIV will give birth to HIV positive children and cases of infecting partners mainly those who are in discordant relationships but also an increase in case of HIV infection in the country.

It's believed that the drugs which are delivered in Uganda and given to patients have a short life span yet patients are supposed to have continuous treatment.She urges national medical stores to deliver medicine with longer shelf-life which will reduce on the volume of the medicine that expiries.

She also calls upon the global fund to step up its efforts with an emergency procurement of medicines for third line treatments, doubling current investments in order to ensure a continuous access to highly active therapy to all people with HIV and are on the third line treatment .

Relatedly Moses Super charger Nsubuga of Joint adherent brothers and sisters against AIDS ( JABASA) observes that world Bank provides the fund to Uganda, but there is no drugs.He calls upon the government to avail third line directions, guidance to all health workers who know how to manage the crisis and monitor them closely for atleast every after three months.