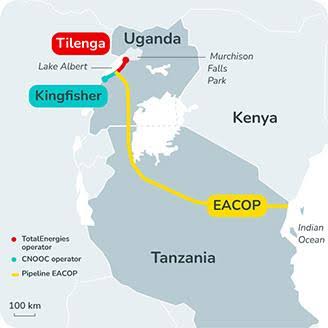 The East African Crude Oil Pipeline Project (EACOP) is a pipeline that will transport oil produced from Uganda’s Lake Albert oilfields to the port of Tanga in Tanzania where the oil will then be sold onwards toworld markets.

The pipeline is buried and once top soil and vegetation have been re-instated people and animals will be able to cross freely anywhere along its length.It represents a significant inward investment of some $4 billion across both Uganda andTanzania, thus value creation is also extended to Tanzania.

A furious Deputy Speaker of the Ugandan Parliament went on to Twitter to say, “I condemn the motion for a resolution by the European Union Parliament that calls on Uganda and Tanzania to stop the development of the oil and gas projects in the East African region.”

The resolution is based on misinformation and deliberate misrepresentation of key facts on environment and human rights protection. It represents the highest level on neo-colonialism and imperialism against the sovereignty of Uganda and Tanzania,” he added.

Earlier, President Kaguta Museveni threaded a response to the European Union Parliament saying, “the remarks of the Deputy Speaker and the Attorney General in one of the dailies concerning the EU Parliament and EACOP interested me in making some comments of reassurance to our people.

President Museveni assured the country that the project shall proceed as stipulated in the contract the country has with TotalEnergies and CNOOC. Adding that We should remember that Total Energies convinced him about the Pipeline idea and if they choose to listen to the EU Parliament, we shall find someone else to work with.”

The East African Crude Oil Pipe runs 1,443km from Kabaale, Hoima district in Uganda to the Chongoleani Peninsula near Tanga Port in Tanzania.  80% of the pipeline is in Tanzania. It is aburied thermally insulated 24″ pipeline along with six pumping stations (two in Uganda and four in Tanzania ending at Tanga with a Terminal and Jetty.  Here crude oil will be loaded onto tankers.

One of the resolutions from the European Parliament, calls on the European Union and the international community to exert maximum pressure on Ugandan and Tanzanian authorities, as well as promoters and stakeholders of the project, to protect the environment.However, according to the NEMA Executive Director, Dr Barirega Akankwasa EACOP fully recognizes its responsibilities both to environmental protection, the people, land and communities that will be impacted by the project, especially during the construction phase.