Museveni- We need to strengthen the call for value addition 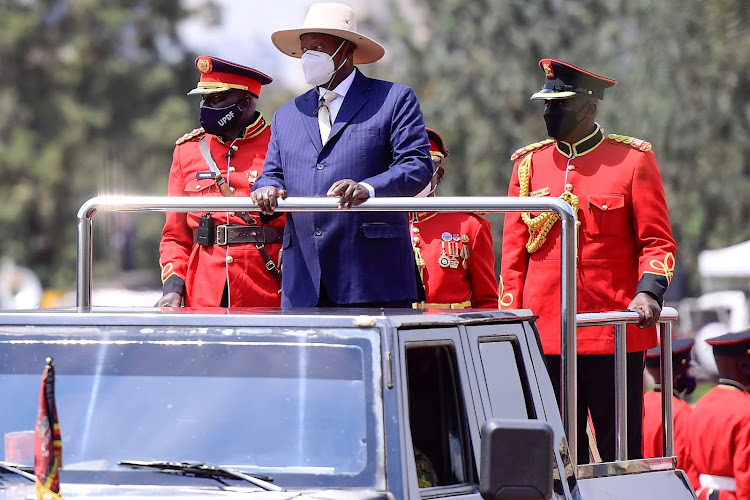 President Yoweri Kaguta Museveni said Uganda is on the right path to development despite the numerous problems it has faced over the past 60 years, he described as having been eventful.

Museveni made the remarks while  addressing  the Nation at uganda's 60th independence anniversary celebrations graced by African Heads of Government and State, Officials and Dignitaries who graced the  scientific celebrations at Kololo Ceremonial Grounds in Kampala.

“It has been quite an eventful 60 years. In spite of the numerous problems over these 60 years, Uganda is now standing and marching forward,” Gen Museveni said, adding that it is only Uganda that faced problems as did many African countries.

While officiating at celebrations to mark Uganda’s diamond jubilee (60 ears of independence) at Kololo Independence grounds themed: A Declaration of African interdependence and our shared destiny.

President William Ruto  asked the private sector in Uganda and Kenya to take advantage of the infrastructure provided by the Governments to transform the region by sharing opportunities for development so that both countries should build prosperity and harness opportunity.

President Ruto also retaliated the need of working together so as to transform regional boarders and convert them so that goods and services can move without any impediments in the East African community region and beyond.

President William Ruto is among the African Heads of Government and State, Officials and Dignitaries present at the a scientific celebrations to mark Uganda's 60th Independence anniversary at Kololo Ceremonial Grounds in Kampala.

Its the first time Ruto made a public speech in Uganda after he was Elected President of Kenya ,asking the private sector in Kenya and Uganda to take advantage of the available environment in both countries in order to  save billions of dollars in imports of materials that already exist in both countries. 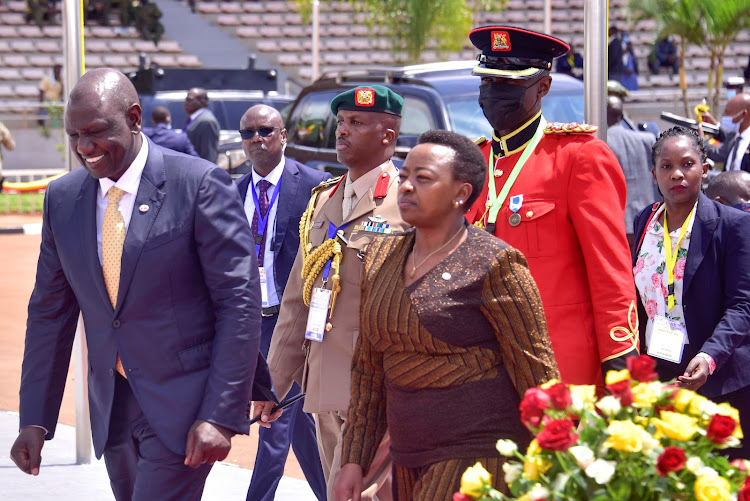 Museveni who was accompanied by the First Lady and Minister of Education and Sports Mrs Janet Kataaha Museveni said Uganda’s advantage amidst the challenges has been its upright and well crystalized thinking on the philosophical ideological and strategic issues since the time it defeated Idi Amin in 1979.

“On the side of ideology, we discovered that in order to create prosperity for our people through the production and sell of sell of goods and services, we need to emphasize the four (4) principles, namely;Patriotism (Loving Uganda), pan Africanism (loving Africa), SocialEconomic Transformation and Democracy,” H.E Museveni said.

He noted that from the onset, they evolved a strategy of 10 points program in order to use their understanding of philosophy ideology to create prosperity for the people of which point no. 5 focused on “Building an independent, integrated and self-sustaining national economy”.

The Commander in Chief of the UPDF also decried what he describedas the comprador bourgeoisie (agents of foreign interests) in Africa, whohe said are opposing Uganda’s value addition efforts, so as to frustrate industrialization efforts, in addition to promoting importation ofsubstandard products including “trivialities like dead people’s hair.

It is these processes that have stunted Africa’s growth,” H.E said.

The President highlighted to over 800 guests at Kololo Independence grounds some of the products that would make Uganda and Africa rich but have rather remained a curse to development because the political class in Uganda and Africa seem not to see the value in them.

The global business for fish is US$544.20 billion;Africa’s share is US$46.87 billion. “Are there professors of economics inAfrica? If the political actors do not see this haemorrhage, why should the academicians not see it? Are they not supposed to scan the global system as to what is going on where and why?” H.E Museveni asked,saying professors and academicians are supposed to use their knowledge to see what is good or bad for their people.

He vowed to fight anybody fighting his value addition on coffee which has been his desire since 1986.