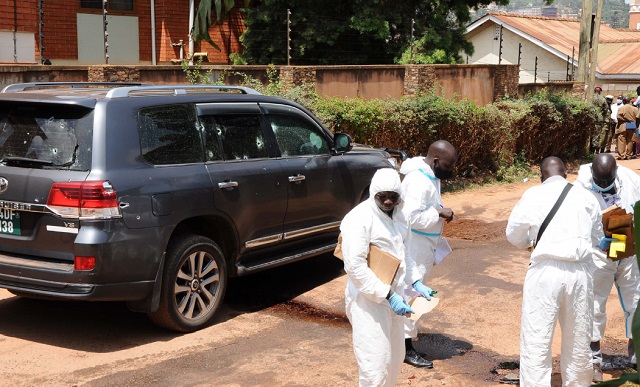 The International Crimes Division of the High Court has further adjourned the case in which 8 people are charged with the attempted murder of works and Transport minister Gen.Katumba Wamala, the murder of his daughter and driver to the 28th of this month.

This is after prosecution led by Alino Agunzu, the deputy DPP informed court that police investigations into teh case are still ongoing.

They  were first arraigned before the court on five charges including the attempted murder of General Katumba Wamala, his bodyguard Sergeant Khalid Kuboit and Boniface Mucunguzi.

The trio survived the shooting which claimed the lives of Brenda Nantongo, the daughter of General Katumba Wamala and his driver Sargent Haruna Kayondo which occurred on June 1st 2021 along Kisota road in Kisaasi, a Kampala city suburb.

But later in October 2021, the Director of Public Prosecutions Jane Frances Abodo instituted 18 other charges against all the accused persons.

The charges included allegations that while at Cheap General Hardware Nansana, in Wakiso district on May 29th  2019, the suspects together with others still at large with malice aforethought, unlawfully caused the death of Jimmy Atukuru, Frank Anania, Abaho Frank Mutsinda and Amim Bugembe whom they shot dead.

According to the state, on the same date and place, the suspects also stole 385 million Shillings from Tedrin Nalule, the cashier of Cheap General Hardware and again murdered Burton Okoti on April 27, 2019, at City Shoppers Supermarket Kanyanya, Mpererwe, Kawempe division in Kampala district.

The office of the DPP also alleges that the accused persons stole 34.7 million Shillings from Nawal Nakatudde at Denovo Bakery before attempting to kill her.

That further between March 2015 and June 2021 while in various places in Kampala, Luweero, Kasese, and in various places in the Eastern Democratic Republic of Congo (DRC), the accused persons and others still at large rendered financial support to Hussein Lubwama alias Master to the commission, preparation of acts of terrorism.

Lubwama was shot dead as the police effected his arrest.