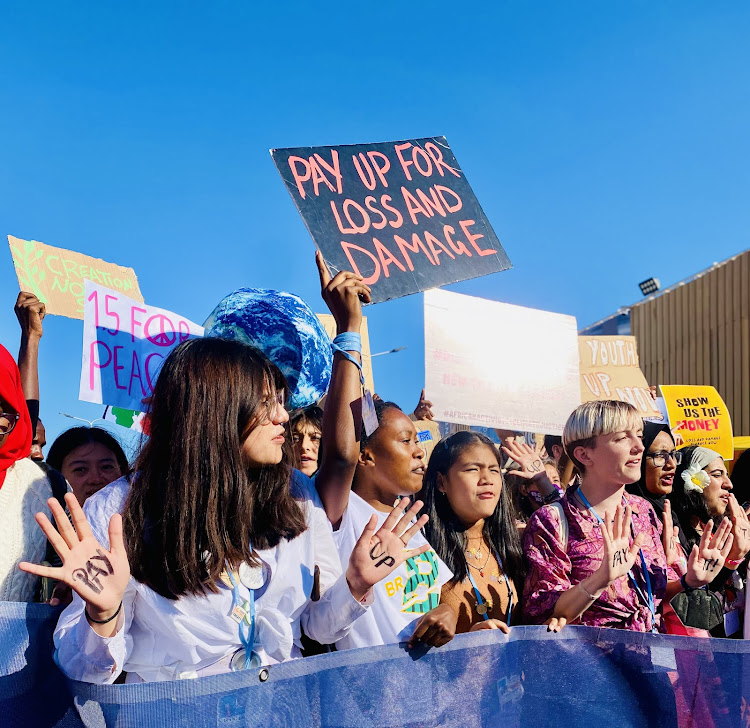 As someone throws cocktail parties, wines and dines for days in one hemisphere, another person dies of extreme hunger and severe malnutrition everyday in another.As one person leaves water running in one hemisphere, a child dies due to large scale wildfires accelerated by climate change.

As laborers start work in the middle of the night due to body temperatures rising to dangerous levels, there’s a royal in a merry-go-round waiting for food to be delivered on their tables.It is with such climate injustices that led to the establishment of a loss and damage fund by theUN climate change conference held in Sharm el Sheikh.

In the second week, the conference was expected by many to be a greater failure than COP 26 held in Glasgow, Scotland because COP 27 had lagged on in the scotching desert of Egypt without a single resolution.

In the mostly deserted conference venue, a twist and a historic achievement was witnessed. It was a dramatic establishment of a climate change loss and damage fund.This year’s UN conference of parties was supposed to take place from 6th November, 2022 to18th November 2022 but having a consensus dragged on until Sunday 20th November, 2022.

Sameh Shoukry, president of the COP27 climate summit, banged the gavel during a closing plenary session at the U.N. Climate Summit in Sharm el-Sheikh, Egypt sealing off this long awaited decision.The decision didn’t come off easy as there were a series of strikes by Climate Activists at the Conference of Parties venue in Sharm el Sheikh until world leaders succumbed to the pressure establishing the loss and damage fund on Sunday.

A breakthrough was witnessed when the international or global climate talks culminated into the European Union making a dramatic intervention agreeing to key developing world demands on financial help for poor countries.

Jonah Kirabo, the Founder Green Futures Initiative Uganda thinks that, “the African COP” has started the transition towards climate justice.The Conferences of Parties (COP) adopted in the 1990s had always been criticized for failing to put a penalty to its negotiation agreements. Now creating a Loss and Damage Fund at COP27 has sent a warning shot to polluters that they can no longer go scot-free with their climate destruction. Kirabo says the Fund will be a subject of discussion throughout the year adding that, “we also call upon our leaders to be accountable with every penny.”Another significant contributor to creation of the fund was the European Union.

The Commission Vice President, Frans Timmermans, launched a proposal on behalf of the European Union to see it agree to establishing a loss and damage fund to which the G77 countries were deeply attached.

The President of the United States of America, Joe Biden arrived in Egypt on 11th November,2022 with a skeptical attitude towards the fund. However, the Biden administration had requested $11.4 billion from Congress for international climate aid. That alone would cover all ofits international climate commitments.

By early Sunday morning of 20th November, 2022, developed nations had unanimously agreed to create a fund to help developing countries pay for the catastrophic consequences of climate change in a statement delivered by Ministers during the closing plenary at the COP27 climate summit in Red Sea resort of Sharm el-Sheikh, Egypt.“We want them not only to pledge for the loss and damage funds, but to rather pay,” Patience Nabukalu a Climate Justice Activist with Fridays for Future Uganda said.

The new fund is designed to facilitate vulnerable countries keep afloat after a disaster. The crucial question of which countries must provide financing for the fund and which will be eligibleto benefit from it has been left to future negotiations.As world leaders delayed to make the decision, many Climate activists feared that lives are beinglost to extreme hunger, malnutrition, wildfires, floods, drought and diseases perpetuated byClimate Change.Just like many African countries and those world over, Uganda has also faced climate changecatastrophes including floods, long drought spells in Northern Eastern Uganda, Karamoja which have made many lose their lives as others remain on the verge of death.

Globally, negotiators and observers that were at the fortnight conference have agreed on onething that world leaders’ words should be followed by action.The Director, Fridays for Future Uganda Hildah Nakabuye sighed that, “ohh, I'm glad they finally created it. It has been way delayed.I just hope the decision doesn't stop on paper but is implemented and on time.”