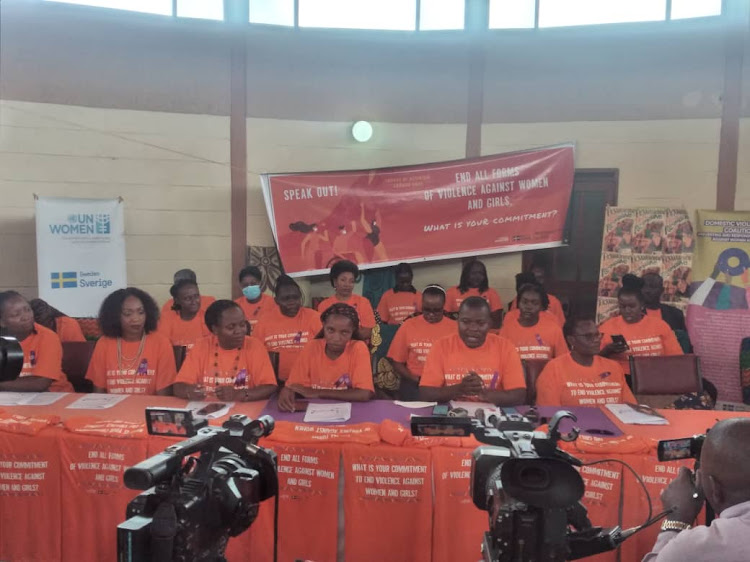 Speaking to journalists at the launch of the campaign Flavia Ssenoga from the Bahai community asked Government to empower and facilitate the LC  courts to enable them handle family matters at local levels to avoid case backlogs in higher  courts which have delayed and denied justice to women.

”Local councils need to ensure resources are available to prevent and respond to violence against women and girls in their communities Senoga added.

Norris Linda Nakimbugwe from Uganda women Network (UWONET) asked the ministry of gender to integrate prevention of violence against women and girls in national programming using evidence based approach/models.

She also tasked the gender ministry to ensure that copies of legal instruments that prevent and respond to violence against women and girls such as domestic violence act and regulations  are accessible to duty bearers.

She has also asked the ministry of justice and constitutional affairs to allocate funds for expeditious prosecution of violence against women and girls cases reported in formal justice system.

Grace Lukwago from center for domestic violence prevention (CEDOVIP) also called for speedy legislation on the Marriage and divorce act by the legislators saying it will settle the marriage disputes in the families.

Lukwago said the recent ruling is an eye opener to legislators to urgently address the issues of marital status before injustices and domestic violence escalates.

The Violence against women has been also contributed to power imbalances given to men than women, cultural norms, society believes against women and others.

According to statistics from Uganda bureau of Statistics of 2022, 51% of women between 15-45 years of age were exposed to gender based   violence.

However the speaker of parliament Anita Among has also tasked Government to implement laws against gender-based violence against women and girls.

Among said that the government had failed to popularize the laws in place yet there is an allocated budget for implementation.

The chairperson  Uganda parliamentary association  Sarah Opendi noted that much as the laws against gender-based violence are in place they have failed to address the challenges of Gender based violence due to lack of implementation.

The 16 days of activism gender based campaign has been organized to create a safer world for women and girls to exercise their full autonomy.

Each year the campaign runs from November 25th on the day of elimination of violence against women and ends on human rights day on December 10th.