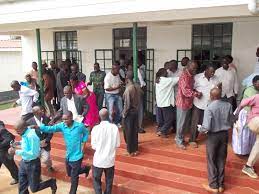 Through his lawyer Ivan Wanume, Munirwa had accused Walyomu of illegally changing his names and other Electoral malpractices.However, in his rulling, Justice Joseph Mulangira has dismissed the said petition on grounds that it lacked merit.

Justice Mulangira ruled that the petitioner's allegations that Walyomu lacked Academic qualifications are false and baseless, since Walyomu has the required academic transcripts to stand as an MP.

The Court further ruled that the petitioner also failed to adduce evidence to prove any alleged Electoral malpractice and ordered him to pay the Electoral commission and Walyomu costs of the suit.

Munirwa and his lawyers have expressed dissatisfaction with the said judgement and vowed to appeal before a panel of three Justices of the Court of appeal.

They accuse Court of failling to determine the major contention of their petition which they say has to do with the alleged illegal change of names by Walyomu. End.