He has been on Remand without trial since March 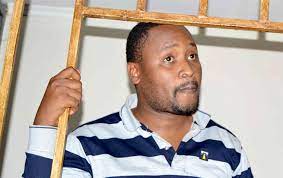 Mubiru  was charged with unlawful possession of Military wear by the General Court on the 22nd of  March this year.

On the 28th of July this year, High Court Justice Boniface Wamala declined to hear a certificate of Urgency filed by his lawyers of  Anthony Wammeli and Company Advocates and ruled that the applicant did not present any substantial ground to warrant court to hear the said application during the 42 days lockdown.

He advised them to wait until after lockdown for their case to be heard.Lawyer Geoffrey Turyamusiima had sued the Attorney General and the Commandant Makindye Military Barracks, accussing them of unreasonably detaining Mubiru at Makindye Military barracks without trial for morethan 120 days.

In his affidavit,  Turyamusiima claimed that  there was no justification for Mubiru's continued detention and his non derogatory rights to a fair hearing, personal Liberty were being violated as he continues to be detained without trial.

He was arrested on the 12th of March 2021 at Kasubi, Lubaga division and detained at unknown location until the 22 when security authorities finally produced him in court following media claims that he had died while in detention.

On the  23rd of March 2021, Mubiru was charged with unauthorized wearing of a uniform after he was arrested on the 12th of March in Kasubi Market by security operatives and taken to unknown destination.

Mubiru was allegedly  picked from Kasubi Suburb in broad day light by the infamous drone .And after his family and party members searching for him in  different gazatted detentions without much luck, rumours then started spreading on social Media that he had passed on while in detention.

His Friends reached as far as gathering at his home to hold a vigil for him.

This forced Security operatives to produce him  before a seven-member panel of the General Court Martial led by Lt General Andrew Gutti and charged with one offense under the Uganda People’s Defense Forces Act of 2005.

Court heard that on 12th of March 2021 in Nakulabye Kampala city, Mubiru was found wearing a red beret which is a monopoly of the Defense Forces and likely to cause confusion, but he denied the charges.

Mubiru was one of the many NUP supporters who are currently in prison for wearing red berets  which are said to be a preserve of the army.

Majority of these were arrested wearing the said attaire during the November 18 2020 protests in the country,  flowing the arrest of Party President Robert Kyagulanyi during the concluded Presidential election campaigns.

The army had warned the group from wearing the said berets mataining that the said attaire was a preserve of the army,  but the party leaders urged their members to continue wearing them on grounds that they were not breaking any law.End