IIn Plea Bargain, a suspect confesses to a crime charged with in exhange for a lesser sentence. 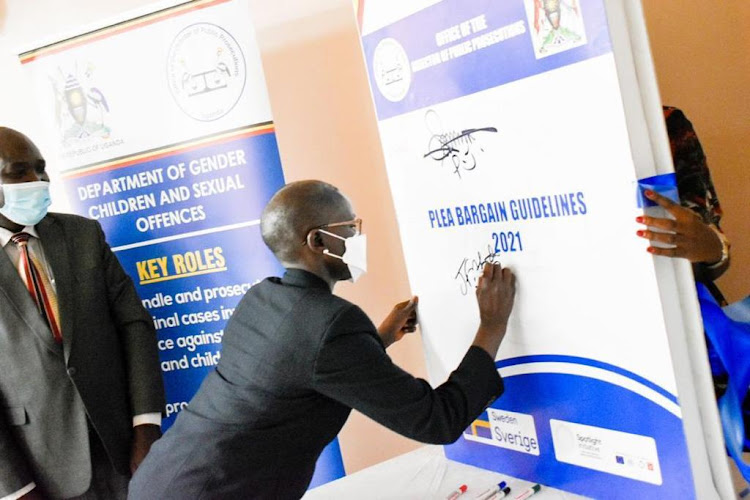 The Office of the Director of Public Prosecutions  has launched Prosecutor Plea Bargain Guidelines  to enhance the efficiency of the criminal justice system.

The guidelines developed with support from UN Women  and launched by  DPP will be followed by prosecutors while conducting plea bargain for orderly, predictable, uniform, consistent and timely resolution of criminal matters.

The Prosecutor Plea Bargain Guidelines are intended to train and build the capacity of all stakeholders in the criminal justice system.

Principal Judge Dr. Flavian Zeija embraced the Guidelines as a remedy for injustices that were being caused during the process, particularly unfair sentences.

According to Justice Abodo, the Prosecutor Plea Bargain Guidelines are intended to train and build the capacity of all stakeholders in the criminal justice system and in particular; Prosecutors, Judicial Officers, Defense Lawyers, Police and Prisons Officers on the objectives and procedures of plea bargaining which are human rights based, victim/survivor centered and gender sensitive.

Dr. Benson Oketch, the Chief Guest who represented the UN Women Country Representative at the launch said, “The Guidelines are intended to elevate the survivors’ voices by allowing them to participate in the plea bargain process.”

The DPP expressed her gratitude to UN Women, EU–UN Spotlight Initiative and the Embassy of Sweden for the financial support towards the development of the Guidelines.