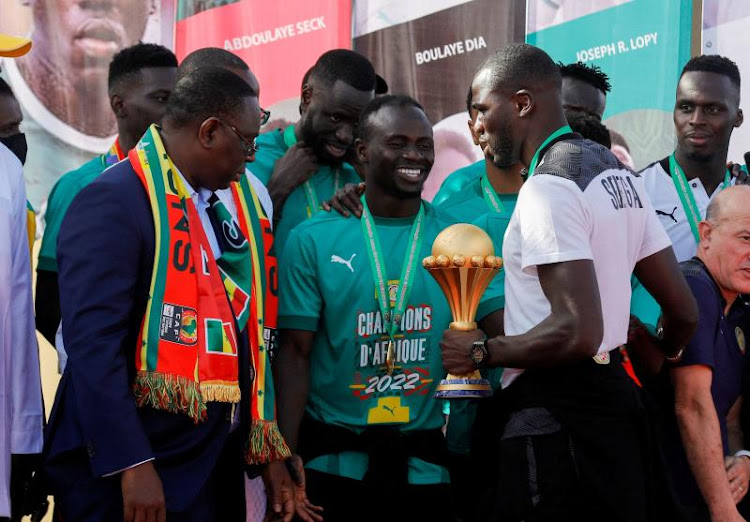 Senegal’s President Macky Sall speaks with Sadio Mane and Kalidou Koulibaly as he welcomes the Senegal National Soccer Team upon their arrival after their Africa Cup of Nations win, at the Leopold Sedar Senghor Airport, in Dakar, Senegal
Image: Reuters, Zohra Bensemra

Senegal’s President Macky Sall awarded the national football team cash prizes and plots of land on Tuesday, following the squad’s victory against Egypt in the African Cup of Nations.

Senegal defeated Egypt on penalties to be crowned champions of Africa for the first time in their history which triggered triumphant commemoration across the streets of Dakar on Sunday, February 6th 2022.

In a colourful ceremony at the presidential palace in the capital Dakar on Tuesday, February 8, each member of the playing body received an amount of $87,000. 200 square-metre plots of land in Dakar and 500 square-metre plot in the nearby city of Diamniadio.

President Sall also appointed each member of the winning squad the country's prestigious Order of the Lion, as thousands of fans cheered outside the gates and also urged Senegal coach Aliou Cisse to lead his team to the semi-finals of the 2022 World Cup, which will be held in Qatar later this year