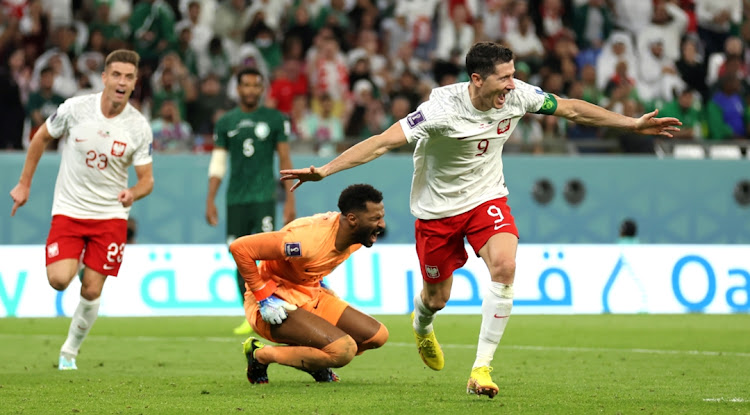 Robert Lewandowski, one of the most prolific strikers in club football, finally got the first World Cup goal of his career when he netted against Saudi Arabia on Saturday.

The Barcelona and former Bayern Munich forward capitalised on a costly mistake by Saudi defender Abdulelah Al-Malki, stealing the ball from him and coolly rolling it past goalkeeper Mohammed Al-Owais to give Poland a 2-0 lead in the 82nd minute.

A beaming Lewandowski ran to his teammates to celebrate finally opening his World Cup account in his fifth match on football's biggest stage.

Lewandowski, 34, had earlier provided the pullback for Piotr Zielinski to open the scoring for Poland.

Barcelona forward Lewandowski made sure Poland took a big step towards the last 16 in Qatar when he rolled home in the 82nd minute after being gifted the ball by Abdulelah Al-Malki.

However it was a battle for Czeslaw Michniewicz's side, who were leading at that point thanks to Piotr Zielinski's roofed finish and an incredible double save from Wojciech Szczesny after Salem Al-Dawsari's penalty late in the first half.

Egged on by a vocal crowd, Herve Renard's Saudi team came out with the bit between their teeth and the Poles frequently struggled to handle their aggressive press.

Lewandowski also played a key role in Poland's opener against the run of play in the 39th minute, pulling back for Zielinski to finish after nearly clipping home his first World Cup goal.