The first appellant pleaded guilty, the other four were Found guilty 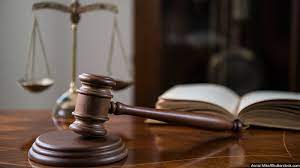 The Court of appeal has upheld a murder  conviction sentence handed to five men in 2015 in Pader district.

Labongo Walter, Okello Victor,Okanga Godfrey,Okello Jamilo and Okidi John Oryemu were  on the 20th of May 2015 found guilty of Murder by the Pader High Court and jailed 20 and 35 years .

The culture of murdering human beings with a view of compensating the bereaved Family was prevalent in the Acholi sub-region, this was unconstitutional  and needs a deterrent sentence. The appellants do not seem remorseful and killed the deceased in a monstrous manner

Evidence showed that on the 17th of May 2014, at Aluka Westward in Pader district, the deceased Oola Peter and other people had gone to the garden.

The appellants armed with deadly weapons including Pangas, axes, clubs and spears,  went to the said garden and attacked the deceased and his group,  the deceased tried to intervene,  but was attacked by the appellants and died on his way to hospital.

However,  they appealed their convictions and sentences accusing the trial judge of convicting them basing on alleged insufficient evidence which was full of contradictions and Falsehood.

"We therefore find that the trial judge took into account the 11 months and 5 days the 1st appellant had spent on remand, and the 20  year jail term was not harsh and excessive  despite him have confessed to the crime, on the 2nd to the 5th appellants,  the trial judge did not take into account the said remand period and the 35 years were harsh and manifestly excessive " Justice Musoke ruled.

The 2nd to the 5th appellants had denied the said offence and were convicted after going through a full trial.End.