The intricacy of raising an orphaned elephant A caretaker watches over an elephant calf at UWEC in Entebbe.

Usually, rescued infant elephants arrive at the UWEC Zoo in Entebbe when they are severely traumatized by the events that left them orphaned. There are myriad accounts that cause an elephant calf to be separated from their mothers, findings often lead to poaching or human Elephant conflicts.

The infant inevitably enters a period of deep grief for the loss of their loved one, which can last months. During this critical period, their survival hangs in the balance, and not all the calves may be persuaded to find the will to live again. UWEC offers a secure base and loving environment to nurture and raise these orphans in their time of greatest need.

Milk is a great component of the orphans' care during their precarious early months. Human baby formula milk with some selected food supplements compose their major diet. Infant elephants are difficult feeders thus calling for the zoo keeper’s patience to encourage an orphan elephant to take enough milk. Equally important is the hands' husbandry needed to raise a psychologically good calf. The caretakers play a crucial role in this regard, stepping in as the elephant's surrogate family. One has to remain with the orphan 24 hours a day, providing round-the-clock care, milk on demand, and plenty of love and guidance, just as the mother would do in the wild. 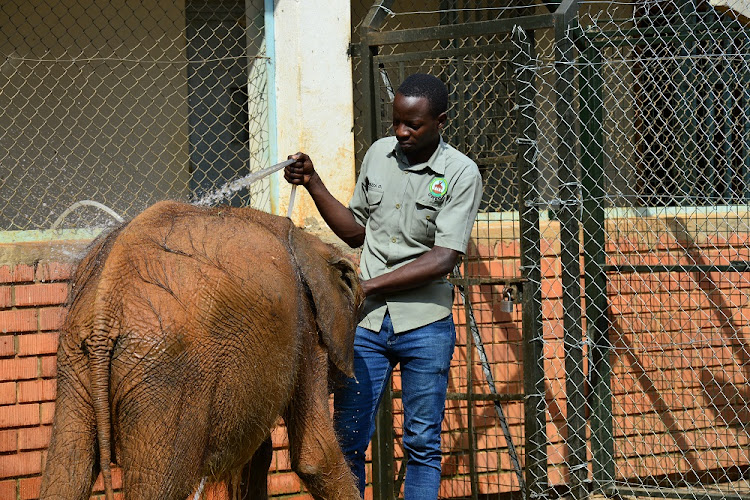 An elephant calf is helped to cool off in the hot weather.

The keepers sleep with the infants during the night, working on a rotational basis to avoid a calf becoming too attached to any person and pinning when that individual has to take a rest.

Gradually, calves settle into a three-hourly feeding routine throughout the day and night while the keepers remain ever present to represent the orphan's lost family.

Teething is particularly a fraught time for elephants. The first molars erupt between the first and fourth months of age a process that can trigger fever,  diarrhea and compromise the immune system. This can be life-threatening, plunging the calf into rapid physical decline which makes teething the most challenging period when raising the elephants.

Baby elephants duplicate human children in so many ways, highly intelligent and with giant memory, they need toys and mental stimulation to thrive. The caregivers build all sorts of distractions into infants’ daily routines, taking them on long varied walks around the Centre. The babies have unlimited access to nature play items such as sticks and stones plus playthings like rubber tubes and balls

Cause for celebration is when an orphaned elephant plays for the first time, which shows that they have embraced their new life. Only then can we be sure of a reasonable chance of success as an elephant will only thrive if it’s happy.

As in human children, gentle discipline teaches the calf about what is and is not acceptable behavior. However, it must be meted out cautiously and with great sensitivity, through nothing more than a chastising tone of voice and accusatory wagging of the finger. It is equally essential to make a big show of forgiveness later so that the calf understands that it was scolded not because it’s not loved but rather for momentary wrongdoing.

With elephants, one reaps what one sows, and how the animal reacts to humans when grown depends on how humans treat them when young.

The third and fourth milk-dependent years are the weaning years when both the quantity and frequency of milk feed are gradually reduced as the vegetation becomes a greater part of the calf’s diet. Elephants need a varied diet comprised of different plants and tree bark which contain the minerals and trace elements needed to build and strengthen their enormous bones. This plant selection is instinctive within an elephant’s genetic memory and is not something that has to be taught by humans.

It is an extremely expensive venture for UWEC to support elephant growth a case in point is the Human baby formula that is used to support the growth of elephants costs the Centre 240,000 UGX per day (USD 65) This amounts to 7.2 M UGX (USD 2000) per month.

This is a significant drain on the organization’s meagre resources and financial envelope.

Recalling the COVID-19 pandemic when the center's gates were closed to the public and thus not earning any income. Fundraising for resources to cater to two elephants alongside other 254 animals was a test of trial.

About elephants in Uganda

Uganda has more than 5000 elephants (WCS,2015) living in Queen Elizabeth, Kideppo Valley, and Murchison National parks, some forest-dwelling elephant species are in Kibable national parks, and the Bwindi-Mghahinga conservation area.

The 18th meeting of the conference of parties for the Convention on International Trade of Endangered Species of Flora and Fauna (CITES) in 2019, maintained that Ugandan elephants in Appendix 1 are categorized by IUCN as Endangered.

Along elephant ranges, they majorly killed for Ivory, a precursor for poaching and Human Elephant conflicts, especially in communities adjacent to protected areas.

Strategic interventions are being undertaken to reverse the trend which include digging trenches to deter elephants from crossing to community land, supporting the community with alternative sources of livelihood that are pro-conservation such as apiary and growing of red pepper on the park and community land boundaries. Additionally, a compensation scheme is currently catered for under the Uganda Wildlife act of 2019. These efforts have been a game changer in the face of elephant conservation something that has brought a population increase of fewer than 600 elephants in 1986 to more than 5000 elephants today

Uganda Wildlife Conservation Education Centre plays a pivotal role in elephant conservation as highlighted in the 2016-2026 elephant conservation action plan, UWEC act 2015. which includes supporting expert veterinary services to elephants in need in all the national parks, rehabilitating the severely injured ones at the center in addition to hand raising the orphaned ones.

Also, conservation education programs have been scaled up both on-site and in the communities to increase awareness of elephant conservation and inspire positive attitudes

It is notable that poaching steals from us, the resources invested in elephant conservation due to lack of selflessness in communities would have been invested in other public good social projects. This is in addition to losing ecological services, aesthetic values, and improved tourism potential.

The writer is a Zoo keeper at