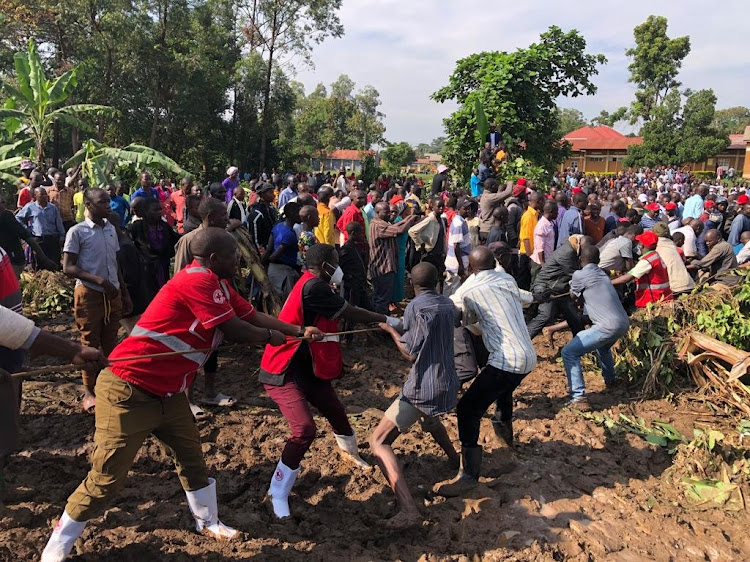 Uganda Redcross with some members of the public retrieving a car that was washed away by the floods.
Image: Courtesy Photo

The death toll from the floods in the Mt. Elgon region has risen to 24 as more disasters are anticipated following the heavy rains.

The bodies include 11 who were travelling in a Toyota Super Custom to attend a marriage ceremony in Kabwangasi Sub-county Butebo District.

So far 24 people are known to have died in the floods that hit  Mbale, Kapchorwa, and Sironko over the weekend.

According to Uganda Red cross 21 bodies have been recovered from Mbale, three from Kapchorwa .

In Sironko district,no death has been reported how ever 480 families have been affected.

Hundreds have been displaced as heavy rains ravage Mbale which has led to the  bursting of river banks leading to the floods and many people have been left  homelessnow.

Districts of Butalejja, Soroti, Katakwi, and  Amuria  have been placed on high alert  for  floods.

The floods ravaged several areas after the rivers including Nabuyonga, Namatala and Nambaale burst the banks destroying houses and displacing hundreds of people.

The Uganda National Metrological Authority (UNMA) has warned that this month is likely to be characterised by enhanced (heavy) rainfall. I

In there weather outlok for August and review of rainfall perfomance of June and July report the authority indicated that particular areas of the country will be receiving slightly more rainfall than the rest.